One of the great creative leaps of the 20th century came from a student at the University of Minnesota who worked part-time as a security guard. He drew together wargaming, Diplomacy-style gaming, and improvisation into a single game that people haven't stopped playing in the forty-plus years since.

Today would have been Dave Arneson's 68th birthday, which only brings home how young he was when we lost him. His work with Gary Gygax on Dungeons & Dragons is practically legend. You can read the important bits in Playing at the World, although like most histories it winds up focusing on Gygax's larger than life personality. Dave's spirit is subtler and harder to find, especially with how much time Gygax had to leave his mark.

The irony is that we have maps of what Dave's dungeon looked like when he was running it in the convention circuit around 1975-76. He published them in the First Fantasy Campaign. THis is what level 1 looked like: 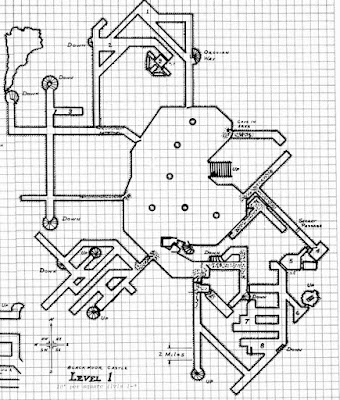 The first time that players went down into Blackmoor's dungeons, it was in that massive, cavernous chamber in the middle, and they had to find their way through narrow, slanting tunnels in search of treasure and magic. We know they would find blobs, among other things; a recent post by Greg Svenson on the Comeback Inn (registration only) detailed the ghosts of Blackmoor:


Ghosts cannot be killed. 1 ghost per person or thing killed in expedition total. Have human sacrifices every 30 days. Are able to paralyze all mortals by presence. Magic armor and super heroes and wizards on affected.

(Presumably Greg meant "unaffected" instead of "on affected"; these are notes written in a 1972 copy of Chainmail when it was new.)

Haunted rooms have a whole page plus of description in The First Fantasy Campaign, and follow naturally from this. Consider the Black Pit:


An area of noxious fumes and bottomless pools caused by some natural phenomena where it is, of course, rumored that a gate to Hades is located. It is also rumored that some horror inhabits the area that has been cast out of Hades to attack the unwary or guard some treasure.

The difference between Arneson's dungeon maps and Gary Gygax's fascinates me. Arneson focuses on weird, lengthy corridors, occasionally huge rooms, but mostly small chambers and hallways. (Room 9 at the top has a total of 60 goblins - tight quarters!) It feels much less "crowded" and each room can be totally purposeful, while the dungeon as a whole is instinctively nonlinear and interesting to explore.

Arneson's work is perhaps less systematic than Gygax's, but it seems to me to more deeply evoke an imagined world. Of course, this is also a man who lists robots under "Magic Items," so how could his work not be close to my heart?

I've thought a lot about what an Arnesonian game is, and the ideal system for it. Arneson probably had some rules behind it, but as Mike Mornard has put it in his call to BE A FKR! (Free Kriegsspiel Renaissance), it strikes me that the actual system run by Arneson was a type of Free Kriegsspiel, a wargame where the referee created rulings on the fly, run within a rough framework outlined by Chainmail and the First Fantasy Campaign. PCs aren't classes; they're flunkies who start out as zeroes and grow through combat and survival, and become major players in the setting.

Given that, it's maybe fitting that the First Fantasy Campaign is not presented as instructions but an example of results and ideas. It's the only definitive statement of Arneson's gaming that we have, and does not rise to the level of a manifesto, but it's worth if nothing else Googling the name and checking out some of the top results. (If there is ever a legitimate PDF of it, please buy it.)

So the next time you run a game, give a thought to Dave. He ran some great games, and it's worth getting a bit of his spirit and boundless creativity into your own.
Posted by Wayne R. at 4:22 PM