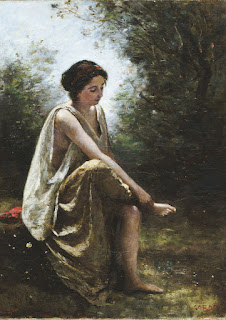 Orpheus, then, followed Eurydice into the underworld realm of Hades, where he found Eurydice. His music was said to be so piteous that Hades and Persephone permitted him to bring Eurydice out of the underworld and back to the world of the living, but he was to walk in front of her and not turn back. But as soon as he reached the outside world, he turned around; Eurydice had not yet left the underworld, and was lost to him forever. He eventually was killed by women in a Dionysan fury. The story is one of the great tragedies of Greek myth.

In D&D terms, of course, he should have just had a friendly cleric cast Raise Dead.

We talked in the Persephone entry about people belonging to the underworld, so I won't repeat that part. I do think it's worth underlining how final death was in Greek mythology; there was no easy way back, and even the gods would intervene to keep their favorites alive (think of Athena and Odysseus). It is somewhat cheapened when any cleric with access to fifth level spells can pop dead Eurydice back.

The basic frame of the story, of going into the underworld on a perilous quest, is of course inescapable in D&D. It's the whole point. Getting back out safely is, of course, an exercise in ingenuity (and sometimes luck) for the player.

The landmark of the underworld in Ovid is the great river Styx. It was this river that was supposed to have given Achilles his power (and the vulnerable heel that he was dangled by), although it is notably not the river navigated by Charon; that was the river Acheron, although Ovid still mentions a ferryman. Still, the idea of a river bounding the underworld has a lot of potential. If you are using the mythic underworld concept in your dungeon, an underground river or a gate (Ovid mentions the gate at Taenarus) is a terrific way to convey it. 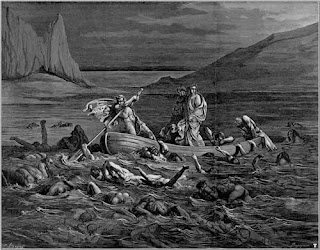 Having such a boundary makes it a definite choice for the characters to cross into the realms below, and allows you to incorporate areas such as the basement of a castle that is "just" an underground location and not part of the underworld proper. The rules that Philotomy discusses, such as doors remaining stuck or monsters wandering the corridors, only apply once you have crossed the Stygian border. There may be consequences or challenges for taking something out and into the broader world.

A genuine sense of aesthetics and taste in its denizens is generally under-utilized. Evil is often aesthetically "ugly" and unappealing, and that has overall been the trend in D&D. But it isn't necessary; the underworld can contain and appreciate beauty, even if in a dark and twisted way. You can read the "music tames the savage beast" into this, where particularly beautiful offerings might be useful for negotiating with underworld entities.

One other rabbit hole that can be gone down with Orpheus and Eurydice is mystery religion. Orpheus is closely linked with the Orphic Mysteries, a well-documented early form of the mystery cult. Initiates were taught rites and rituals that had a secret mystical meaning, and we have several surviving Orphic hymns. These are poems, attributed to Orpheus, that contained detailed information on the mythological world. This strikes me as a fertile religion for a fantasy world; its initiates form a secretive group, and it represents a way of thought that is different from modern rationalism in an interesting way.

We'll leave Orpheus looking back at Eurydice. For the curious, I also intend to look at Odysseus and Heracles within the realm of Greek myth, and getting into Egyptian and Norse myth. Any thoughts on other mythology to approach would be appreciated.
Posted by Wayne R. at 4:35 PM