Announcing The Secret of Cykranosh 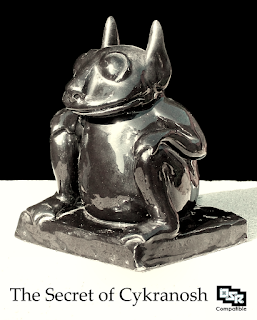 I am extremely happy to announce that you can now buy The Secret of Cykranosh via DriveThruRPG as a Pay What You Want module.

This is a short module (6 pages) that wouldn't exist without Dyson Logos's work. I based it on the Dellorfano Protocols Dungeon that I linked in last night's Actual Play report. Dyson has been releasing certain maps with a CC-BY license thanks to his extremely successful Patreon campaign. This allows anyone to use and remix the original work, even for commercial use.

Because I like Dyson's move so much, I've also released the complete text of this module in CC-BY. So not only is it free if you want it, you can also use it in your own projects however you like. I'm a big fan of the Creative Commons license as a way to share and distribute gaming material because it's less restrictive than the OGL.

You'll also notice that it is an OSR Compatible module. I've always intended to use this mark as a way to distribute my own work, I've just run into problems getting a lot of that work out. There's a complete compatibility statement at the start of the module.

As anyone who recognizes the statue of Tsathoggua on the cover can tell, and anyone who's read "The Door to Saturn" knows, this is deeply inspired by the work of Clark Ashton Smith. I've worked CAS's ideas throughout the module, and I think fans will really enjoy this little adventure. The cover is from a (Creative Commons licensed) photo of a statue of Tsathoggua made by Richard L. Tierney, who happens to sort of be an Appendix N author (Tierney wrote a story in Swords Against Darkness III).

In my opinion, "The Secret of Cykranosh" is the kind of module that should be in a magazine like Fight On! or The Dragon. But we don't quite have that, so I'm happy to release it as a PWYW module on DriveThruRPG. If it has a good reception I'm certainly happy to do more in the same vein.
Posted by Wayne R. at 10:20 AM