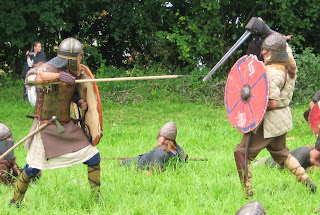 The title of this blog is Macaronic Latin for "Always Initiative One," but I don't actually write about initiative much. Which is odd, because I actually do think about it a good bit, just not in a format that's ready to write about. Here I'm going to be focusing on OD&D, although coming at it by way of Chainmail.

In the first round of Chainmail man-to-man, the attacker strikes first, unless the defender has a longer weapon, or the defender has high ground. In subsequent rounds, initiative stays the same, unless one side has a shorter weapon or the high ground. All of this makes sense. If a man with a sword attacks a man with a spear, the spear-wielder can fend him off and get the first blow in, but if they both survive, the man with the sword has the advantage because he's overcome the spear's range and can work more quickly.

The state of affairs in Chainmail is good, and it's worth seeing what we can do in terms of replicating it in D&D. Unfortunately, it doesn't cover enough possibilities; what if someone is firing missiles, or throwing spells, or fighting against a creature that attacks with its claws? Chainmail only has 12 weapon types (if you don't have Chainmail but do have OD&D or Holmes Basic, the weapons are arranged in order by length in both of those books). So clearly it's going to need some work.

Outside of surprise, the main comment that OD&D has on initiative is under the description of abilities:

Dexterity applies to both manual speed and conjuration. It will indicate the character's missile ability and speed with actions such as firing first, getting off a spell, etc.

We're not told how Dexterity indicates this. We can compare stats when an Elf is taking a shot at an Evil High Priest, to see whether the Elf's arrow gets off before the EHP's Finger of Death spell, but it breaks down once we have monsters with no stats. So if a Hobbit is fighting a Manticora, does the plucky hero throw his stone before the creature's tail spikes fire? We don't have a Dexterity score for the monster. Also, this doesn't specify whether it factors into melee at all.

In the 1975 article in The Strategic Review, "Questions Frequently Asked About Dungeons & Dragons Rules," Gygax did make some attempt to clarify initiative:

Initiative is always checked. Surprise naturally allows first attack in many cases. Initiative thereafter is simply a matter of rolling two dice (assuming that is the number of combatants) with the higher score gaining first attack that round. Dice scores are adjusted for dexterity and so on.

This doesn't specify exactly how Dexterity adjusts initiative, but in the ensuing example Gygax says that the Hero gets a bonus of 1 due to high Dexterity. We can reasonably extrapolate that he is geting +1 for a Dexterity of 13 or better, matching the missile adjustments given in OD&D.

Unfortunately the method in the OD&D FAQ doesn't get us an effect much like that in Chainmail. Now initiative is mostly random, with a bump for Dexterity, but weapon length has disappeared from the equation.

The Judges Guild tried to solve all these factors (and add a few more) in the Ready Ref Sheets. The Weapon Priority table (you can see it on the Zenopus Archives site here) factors in weapon length, spell level, missile weapons, dragon breath weapons, armor, monster speed and Dexterity. Which is all for the good, except that the priority system has a fatal flaw: it makes longer weapons better in absolute terms than shorter ones. A spear in these rules is better than a sword, and if you're using all d6 damage, there's no reason to ever use a sword. Which is silly, as there are plenty of reasons to use swords in real life.

This really only works if you can work out in advance that, say, a fighting-man in plate with a sword and Dexterity of 14 has a total rating of 5, while an orc (9" move) with a spear has 6. The orc always goes first. But it has some good ideas, and we can pull this all together without so much work that it's unwieldy.

This is a much-simplified table that takes into account weapon length:

The system is simple: roll initiative on 1d6, individual for PCs, as a group for monsters, and apply the above modifiers. Roll-off (no modifiers) on ties.

I chose not to flip the modifiers after round 1. Particularly in d6-based damage systems, 2-handed weapons don't have a large advantage, and giving them a penalty for most of the fight makes them nearly useless. I also threw in the encumbered modifier from the Ready Ref Sheets rule, and merged Dexterity and monster Move rates, which are pretty similar.

This does pretty much everything I want an initiative system to do: it takes into account weapon length, but only on the first round, it takes Dexterity into account, and it makes movement rates a bigger part of the game. A dextrous, light-armored fighting-man with a spear (+3) is at a pretty big advantage versus a clumsy, heavily encumbered cleric with a mace (-3), and will almost certainly get the jump on him.
Posted by Wayne R. at 1:37 PM