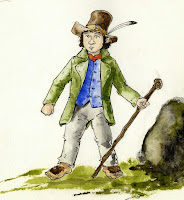 Image by Antoine Glédel; CC-BY-SA
A while back a story of mine encouraged a post over on the Zenopus Archives saying Hobbits are the Rangers of Basic D&D. Looking through Chainmail recently, I noticed a bit that Zach also quoted:


Remember that they are able to blend into the background and so make excellent scouts.

OD&D's hobbits are low in utility; they only get to 4th level, have good saving throws (+4 to level), and are "deadly accurate" with missiles, which should mean roughly that hobbits can throw stones with a bonus on the to-hit table. I would consider adjudicating this the same way that OD&D adjusts the saving throws for dwarves and hobbits, giving them a shift upward in level (so starting at 5th level and going up to 9th) for the column used on Attack Matrix 1.

But it occurs to me that hobbits are also very natural dungeoneers. Which led me to look at The Hobbit, and specifically its description of Frodo's experience while underground.


Hobbits are not quite like ordinary people; and after all if their holes are nice cheery places and properly aired, quite different from the tunnels of the goblins, still they are more used to tunnelling than we are, and they do not easily lose their sense of direction underground – not when their heads have recovered from being bumped. Also they can move very quietly, and hide easily, and recover wonderfully from falls and bruises ...

The light from Sting is mentioned repeatedly in the sojourn that follows, but what is really intriguing is that Bilbo mostly finds his way through the goblin caves by instinct and feel, only to be surprised when he finally hits the underground lake in Gollum's lair.

OD&D is stingier with regard to infravision and darkvision than its descendants; elves and dwarves don't get it any more than humans or hobbits. And lacking thieves, but giving all demihumans enhanced chances to hear, I think hobbits doing dungeon scouting becomes a natural fit. Keep in mind that hobbits are excellent at hiding and will do so quite naturally.

In running dungeon-based games over the years in many systems, it's always seemed like this is an irritating point. Unless you send a dwarf or an elf ahead, or are high enough level to throw around Infravision spells, the natural scouts – B/X human thieves, AD&D halfling thieves, OD&D hobbits – always run into this problem where their natural scouting abilities are limited by inability to see in the dark. Once you're sending a torch ahead, the group typically decides to do reconnaissance in force, sending the whole party in formation through the dungeon and leading to a "kill everything" mentality. And in original and classic D&D that's a recipe for TPKs.

Giving OD&D hobbits the ability to navigate by sound, touch, and instinct (but not to see in the dark; they may have a feeling that something is in a chamber but not know what's there) goes a long way toward solving this practical problem. Obviously they won't be able to do intricate maps, but counting the number of side passages and knowing the navigation paths leading to the next set of stairs allows a PC party to make much better decisions about the way they're going than simply having them lump from room to room like drunken sailors.

Obviously when PCs get infravision they become the natural scouts, replacing the need for such hobbitry. But as a method for OD&D, I would think this is a very viable replacement for the thief-as-blind-scout.
Posted by Wayne R. at 6:49 AM