Old School Gaming in 2014 and Beyond

The year 2014 was a great one for old school gaming.

5e D&D, which I've run with some success, isn't an old school game, and even if it hadn't been released, it would still have been an excellent year for the old school. It's a reasonably good game that plays pretty close to how most of us played 2nd edition AD&D in the 1990s, with some tweaks from the 3e and 4e eras. Old school material is being published for 5e, including OSR authors going and adapting or creating material. It's all to the good; we need D&D to keep fresh blood coming in, and it's better to have a good edition than a bad one.

The overachiever in 2014 is Lamentations of the Flame Princess. The fact that the Free RPG Day adventure was nowhere near as good as last year's doesn't diminish at all the sheer volume of excellent output that LotFP had this year.

Releasing two modules as solid as Forgive Us and Scenic Dunnsmouth in a year would be more accomplishment than most publishers have in a year. The former is a work of art in presenting a module using only two-page spreads, while the latter puts the die-drop area generation method to good use. But then the December releases came out.

Again, just releasing a solid island adventure like The Idea from Space or an absolutely alien concept sandbox like No Salvation for Witches would also be a triumph. The two are seriously great high-concept modules, with NSFW probably taking the edge. And the December releases included great reissues of Tower of the Stargazer and Death Frost Doom. But they are all dwarfed by A Red & Pleasant Land.

RPL is Zak S's book based on Alice's Adventures in Wonderland and Through the Looking-Glass and, to some degree, Dracula. Rather than adapt these works to things already handled by D&D type gaming, it presents a way to adapt D&D type gaming to a bloodthirsty Eastern European land of madness. The book is packed with game-useful stuff, every bit of which is a challenge to the rote standard fantasy that predominates in the RPG industry. The book is a gauntlet thrown down to less imaginative concepts of what D&D can be, and it even has rules for dueling. (But you need to have a glove.)

LotFP has a heap of ambition for next year. Aside from the Referee Book, which I hope will be coming out next year, there are another half-dozen plus adventures and sourcebooks that are bursting with more amazing promise. Including the long-awaited follow-up to Carcosa by Geoffrey McKinney.

So what can compete with that? Goodman Games has been trying. They haven't released anything as revolutionary as RPL, but they have been doing some great stuff in publishing, most of it supported by Kickstarters. The KS for The Chained Coffin, an adventure set in a fantasy Appalachia written by Michael Curtis, turned into a deluxe boxed set that puts out a full setting worth of material. They wound up doing another KS that resulted in a similar treatment for Perils on the Purple Planet by Harley Stroh. This one is a sword & planet module. 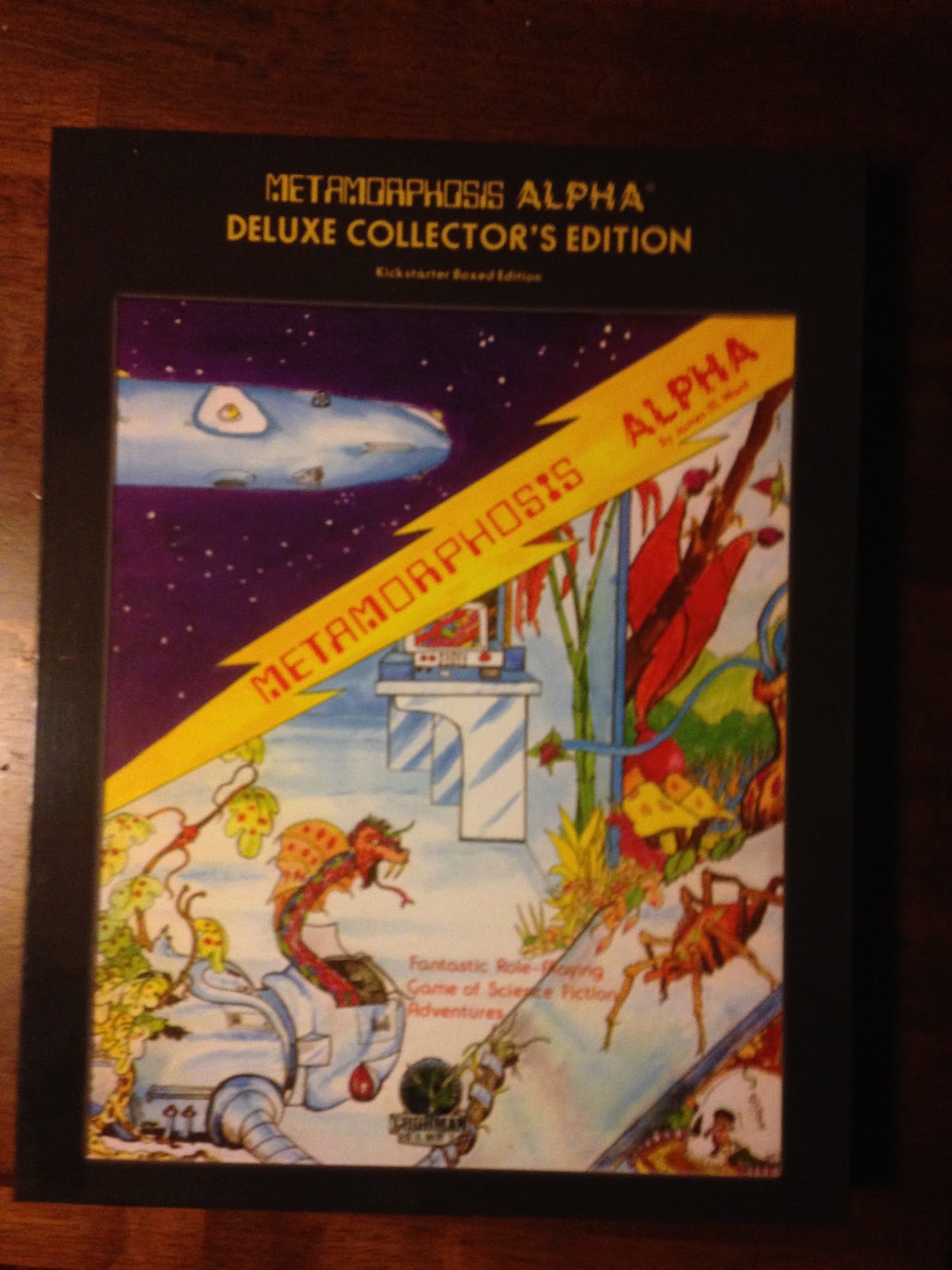 Not to mention - Goodman did another Kickstarter for Metamorphosis Alpha that is suddenly turning it into a supported product line (you can see the line-up here). Just the special edition book is a terrific collection; the final result should make fans of MA jump up and down in celebration. Goodman's next deluxe edition will be of Grimtooth's Traps – the classic collection of Rube Goldberg traps that go over the top to slay the party.

Goodman is also releasing 5e modules. These are serviceable, but not much more; it's disappointing, when so much good stuff is going on in other areas, that they went pedestrian at a time when greatness was called for.

Basic Fantasy RPG has kept on keepin' on  This year saw several new print releases: Adventure Anthology 1, BFRPG Third Edition, and The Basic Fantasy Field Guide (a monster expansion). BFRPG has always been a labor of love, and where Lamentations and DCC are trying to do revolutionary things and present mind-blowing ideas, BFRPG presents the unvarnished real stuff of classic D&D. If you want a game that is steeped in the "classic" fantasy feel of '80s D&D, Basic Fantasy delivers exactly that.

The Adventure Anthology is a total mixed bag, of course, but it does offer good bits if you need to run D&D for a session. The Field Guide is fine, and is a mixed bag of monsters that needed to be adapted to BFRPG and innovative new creatures. There's going to be a new edition of BF1 Morgansfort coming shortly, which will update some of the adventures in that collection. Basic Fantasy has always tinkered with its older material, and in a certain sense it has become a distillation of the old religion of D&D.

Labyrinth Lord has been in a weird place for several years now. It's still the system of choice for megadungeons, and when the unbelievable happened and Dwimmermount was released earlier this year, it was for Labyrinth Lord and then ACKS. But Labyrinth Lord is more or less a shorthand for "yeah, this is compatible with B/X D&D" and has very much not been taking the lead in driving things forward. It's entered the long tail.

OSRIC never really wasn't in the long tail; its main purpose has always been to keep publishing 1e AD&D modules. It's kept that happening; if nobody else will, & Magazine and Expeditious Retreat Press will  keep new material going for as long as the 1e grognards are around.

Adventurer Conqueror King has been absolutely slammed by Dwimmermount. It caused a big stir when it was released, but it has really only had three significant releases since then: the Player's Companion, Domains at War and Dwimmermount. Of course, you could buy those and not need anything else for the next two years of gaming – so who's going to complain?

Swords & Wizardry is in an even weirder place. There is plenty of Swords & Wizardry material coming out from Frog God Games. Most of it is fine and old school in spirit – but it's all basically adaptations of Pathfinder products, and now Necromancer Games's 5e products. That was true before this year, but it's really become the main stream of new S&W material. Which means that it's more or less a side option for existing publishers, frankly.

There are plenty of other clones, but I think these are the ones driving most of what we see today in the old school gaming scene. It's not that I don't like Delving Deeper, or Seven Voyages of Zylarthen, or BLUEHOLME, but they're serving a niche of a niche.

One area where it's absolutely thriving are zines. Aside from James Maliszewski's Tékumel zine The Excellent Travelling Volume and long-running system neutral zines like Scott Moberly's AFS or Tim Shorts's The Manor, the games that are killing it with excellent zines aren't really that surprising.

It's hard to say what will happen in the future, but the momentum really seems to be with LotFP and DCC RPG. I see them as continuing to be the driving force. What would make 2015 an even greater year is if another publisher takes up the gauntlet that LotFP has thrown and tries to put out products that are as heavy on utility and as fresh in ideas.
Posted by Wayne R. at 8:16 PM