Notes on playing B2 Keep on the Borderlands 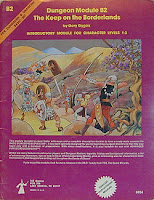 I ran some more Moldvay B/X D&D last night, switching from B1 In Search of the Unknown to B2 Keep on the Borderlands. Overall I found the module more satisfying, although there's plenty of Caves of Chaos waiting for the next session.

The Keep itself worked out well. The PCs got very into interaction with the various characters, including the Curate. It was an interesting prelude to the actual adventure. It also set them off on the track of the hermit to the north of the Keep, which was an encounter they handled well. They defeated the puma quickly and one player was able to knock down and overbear the hermit himself, tying him and taking him back to the Keep, which netted them a small reward.

For tripping I used an attack roll and then a Strength roll to overbear the hermit. Anyone who says classic D&D combat is boring has little imagination - the "rulings not rules" attitude made the encounter interesting.

Once the PCs headed into the Caves of Chaos, they were surprised that they were multiple caves but wound up picking the goblin cave. They wound up fighting goblins in the first room they entered, and lost one PC; they outnumbered the goblins and beat them, finding the money in a barrel. (The character who got the "Bree-Yark" rumor from one of the guards was a dwarf and knew it was wrong since he knows goblin.)

They encountered the wandering goblins after that, and successfully got them not to attack with a good reaction roll. The dwarf tried telling them a story that their chieftain was going to sell them to a giant as slaves, but the reaction rolls kept them skeptical, and the PCs wound up casting Sleep and killing them. They avoided a larger room of goblins and went to another guard post, where they killed a third group of goblins.

It wasn't a terribly profitable adventure for the PCs, which kept the XP fairly low. That's a danger of the first expedition, but I'm interested to see what tack they'll take in the next game. A large number of PCs makes the combats easier but spreads the XP thin. Outnumbering in older D&D, I'm convinced, is the main key to victory.

B2's map was straightforward compared to the mapper's nightmare of B1. Yet it's a much more tactically interesting environment, since there are so many different possible entrances. The home base and wilderness map also make it really quite good, although the wilderness is not exactly full of lurking peril; it's fairly safe as long as the PCs aren't a few squares from a numbered encounter.
Posted by Wayne R. at 8:47 AM