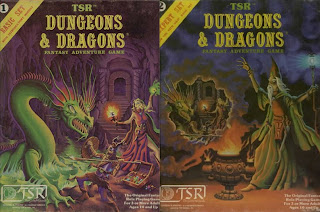 Since the hangout games I'm currently running are using Basic / Expert as their system, I thought it would be useful to discuss some of the differences between it and OD&D. The majority of the system is very similar, although in many places more detailed, similar to my earlier Holmes / Moldvay comparison of magic-user spells.

In Original D&D, the referee checks for wandering monsters once per turn. No matter what, you roll the die and see if some monster is incoming. Holmes moved this back to once per three turns. This changes the rate of wandering monsters on average from 1 per hour (6 turns) to 1 per 3 hours (18 turns). Moldvay switched the turn length back to 2 turns, leaving it at 1 per 2 hours (12 turns). One interesting twist is that OD&D and Holmes both used 6 on the wandering monster die to indicate a monster, while Moldvay switched it to 1. Since I have a d6 where the "1" is the Eye of Sauron, I use this to indicate wandering monsters and therefore gravitate towards the Moldvay style even when I'm running OD&D or Holmes. Even though I don't run in Middle-Earth it seems appropriate.

OD&D had a system that Mike Mornard recently pointed out is extremely dangerous. There is a high chance that wandering monsters are well above the "level" of the dungeon - the first level can have 4th level rated creatures, and the third can have dragons and balrogs. Only 1/3 are from the level 1 chart, 1/3 from level 2, and 1/6 from levels 3 and 4. This makes dawdling in an OD&D dungeon extremely problematic. Holmes levels out the power curve: at level 1, 2/3 of all monsters are from the level 1 chart, 1/4 are from level 2, and 1/12 from level 3. Moldvay doesn't go with any of that, instead using a level 1 chart only for level 1, level 2 just for level 2, and level 3 just for the third level of the dungeon. Moldvay still has plenty dangerous creatures on level 1, but nowhere near as many as in OD&D or Holmes. Notably it's the first version of classic D&D where you can't run into ogres on level 1 of a dungeon.

Unlike OD&D and Holmes, Moldvay does not suggest altering numbers of wandering monsters based on party size. The numbers are calculated for dungeon level, and turn up regardless of how many PCs are in the party. I prefer this because it enforces the idea that the dungeon exists objectively regardless of the PC party, rather than adjusting to them. Moldvay follows Holmes in adjusting OD&D's encounter distance from 2d4x10 (20-80 feet) upward to 2d6x10 (20-120 feet).

Another departure is that Moldvay suggests varying the rate a bit. This is not a reflection of OD&D or Holmes, but is an interesting idea. Some areas and activities may increase the roll to 1-2, while some activities (Moldvay specifically mentions staying in one place and sleeping) make them less frequent. This can be used to excellent effect if you want to make "fast and slow" dungeon areas as I had discussed previously; a fast area could have higher wandering monster traffic, while a slow one could have Holmes's rate or lower. In any case it's primarily a question of the referee rolling correctly.

The final contrast is that all of Moldvay's creatures are in his monster listing. OD&D didn't have this, throwing out references like giant rats, spiders, giant hogs, and thouls - none of which is listed in Monsters & Treasure and each of which is meant to be made up by the referee. As a coincidental note, Moldvay actually wrote up stats for the thoul in his Basic Set, which had been in The Underworld & Wilderness Adventures but never received a listing.

Perhaps the most intriguing thing on the Moldvay list is the humans. At level 1, there are Acolytes, Bandits, and Traders. Acolytes (level 1 clerics with no spells) can be any alignment, while Bandits are Neutral or Chaotic and Traders can be any alignment. This makes for some really interesting dilemmas, since a group of pilgrims wearing plate mail and carrying maces could be Lawful acolytes, or Chaotics; they could also be bandits dressed as clerics to fool opponents. A group of armed men could be traders or bandits and you wouldn't know right away. It's a recipe for some tense encounters.

All told, Moldvay has a very worthwhile take on wandering monsters. I think his pace is better than in OD&D or Holmes, especially considering the explicit advice to speed it up or slow it down. There's less chance of a wildly difficult encounter on the first few levels, and he really expanded the charts to give variety and some real tension to human encounters.
Posted by Wayne R. at 7:59 PM