It's a short week, so you may not have noticed it's Wednesday already. This monster is appropriate for any bridges or high crossings you may have in your campaign setting. 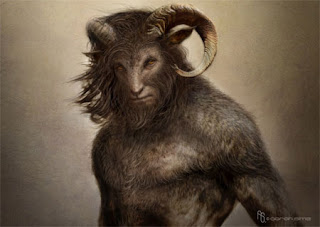 There are several types of goatmen in the world, but the Pope Lick Monster is among the more dangerous. This solitary creature has the hind legs of a goat, with thick curly hair that is sometimes mistaken for a sheep, and the deformed upper torso of a man. It has an alabaster face with a broad nose and wide-set eyes, and its hair matches the fur on its legs.

The Pope Lick monster is named for a creek that its bridge passes over; there may be others living at other crossings. The bridge itself is an old, rickety and narrow bridge about 100' over the water. The monster's extranormal power is its voice, which is able to act as a Suggestion spell luring victims out further. Sometimes it goads them to leap, or to walk over a dangerous portion of the bridge (3 in 6 chance of falling through) or even to attack their compatriots. Victims who resist will be attacked with its rusty, blood-stained axe (+2 to hit and damage due to 17 Strength).

It is believed that this monster is the result of some horrible evil ritual, or else a fell hybrid of human and goat, and it has lived for at least a century. Whether others exist or not is the subject of fertile speculation.
Posted by Wayne R. at 8:44 AM