On Running B1 In Search of the Unknown 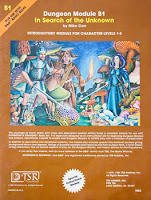 Last night I ran a session of B1 In Search of the Unknown using the Moldvay Basic Set. I've always liked the idea of B1 because of its dynamic dungeon key, where monsters are placed and treasures hidden by the individual referee before the game; as classic modules go, that makes it easier to run B1 for players who have played or even run it before.

I did a fairly "light" stocking on the first level, leaving some unguarded treasures - which turned out not to matter because the players didn't find a well-secreted gem. But the empty rooms turned out not to be too big of a factor.

An early encounter was with goblins who I had in the dining room (room 3). This killed one of the NPCs rounding out the party but had the interesting effect of the PCs capturing several goblins and using them as guides, and out of the three captured goblins one even survived. The rumor table really worked, because the PCs knew about the room of pools and had the goblins lead them straight there. I always find such treks in a dungeon to be really interesting, because they reveal a bit about the layout but just a very specific subset. Goblin fear of orcs also helped the PCs out because they knew where I had placed them. (I ruled that the goblins weren't that adventurous and hadn't explored much beyond that part of the dungeon, but the pool room was so close they knew how to get to it.)

The room of pools is probably my favorite element in the module. The PCs were pretty methodical about it, and I allowed a saving throw against the pool of muting which meant it had no effect. They used the fish to "test" each pool that was suspect, which helped them avoid the pool of sleep, though they also avoided the aura pool because the fish looked stunned for a few moments. It was an effective way to get to the healing pool, which provided welcome HP after the scrap with the goblins.

A few later encounters just "felt right," including a monstrous black widow spider hiding above the bed in the mistress's room. (It lost initiative three times and missed the one attack roll it got, which was enough to do it in.) The valuable mirror was under the pillow and promptly found in the thorough search of the room. Another was a shrieker in the garden room, which of course had the intended effect of drawing wandering monsters - in this case some kobolds. Monsters kept failing morale checks and surrendering, so they now had a kobold and a goblin along who didn't like each other.

In the end, combat managed to kill the dwarf, as the party ran into a programmed kobold encounter - the kobold with them betraying the party. The PCs got out with some good loot from it, if nothing else. The dwarf's demise managed to derail their plans for a permanent goblin servant because no remaining PCs spoke goblin.

The biggest impact of the Moldvay rules was the damage factor. The party's fighter had a two-handed sword and a 17 Strength, and 1d10+2 is more than most of the monsters in B1 can handle by a high factor. Monsters would've been harder in Holmes with all d6 damage. Without a magic-user there was no other major shift away from Holmes. Moldvay's morale rules proved once more why they are my favorites - this group of players was the most creative with their captives of the ones I've seen. As I noted above, initiative rolls really mattered because I kept making crappy rolls for initiative, but I roll initiative even in OD&D.

Because of multiple store rooms, there were two good observations. The first was - "I think we're in an IKEA, not a dungeon." (The difference is the furniture here was already assembled.) The second was how much B1's first level feels like you're raiding somebody's house. This is one of the real oddities of the module. The module also was a pain for the mapper but since so much hangs off of the central area with the kitchens dining room and the landing from the first corridor, it all fits back together.

B1 was only nominally moved to Moldvay by adding morale scores. I was using a brown cover copy of the module instead of B1 for that reason, but there's a dwarf who has exceptional Strength and another whose Constitution score isn't high enough to qualify for the class. There's also a place or two using 3d6 under stat as an ability check instead of the B/X Expert method of using 1d20 roll-under; I find each to work pretty well despite the different probabilities.

All in all it's a fun module to run, and Moldvay worked as well as I expected it to. PCs are a bit tougher than in Holmes because of how ability scores work, but it's still the same fundamental game. I really think B1 could use some re-skinning though in the future. If nothing else, to avoid the "fantasy IKEA" effect.
Posted by Wayne R. at 9:16 AM