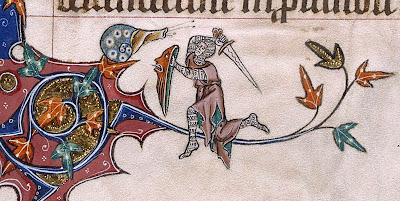 There is a whole genre of illustrations of knights fighting snails in illuminated medieval manuscripts. There are various explanations for why monks laboriously copying books would draw a confrontation between a knight and a deadly snail. Symbolically the snail stood for the deadly sin of sloth; a monk might decide to illustrate them on that basis. Pragmatically the monks were often gardeners, so this may have been a bit of satire based on their own experience and the uselessness of professional knights. No one's really sure.

AD&D, of course, had the flail snail, a multi-headed monstrosity of a giant snail. But I see some potential for using snails of about the size in the manuscripts, an implied 2' to 3' tall and fighting against armored humans, as monsters. These are probably no more than 3 HD, although they should have very good AC (maybe the range of 4 to 2) to represent the protection of their shells. Their movement rate would naturally be very slow, and they'd attack with their pseudopod-like bodies.

The interesting question is their slime trails. This has plenty of real-world uses but if we're making a D&D monster it should be something with some mechanical impact. It's a bit on the nose, but one possibility is that the slime causes opponents to act as if under a slow spell. For straight-up damage it could be acidic, working like the attack of an ochre jelly: destroys wood, leather or cloth, and does 1d6 or 2d6 damage per turn if the victim fails a saving throw. Alternatively it might be poisonous, with the precise effect depending upon the individual referee's rules for poison.

Some snails might have magical properties to their slime, or in their shells. For instance the slime might bring on hallucinatory visions (something I think is under-utilized in fantasy games) or the shell might be immune to some form of attack such as lightning. And both can be powerful magical ingredients; in real world magical thinking, snails are associated with divination and love magic.

The reason I'm presenting all this as possibilities is that I think any time you have a giant snail in a game, it should be unique. These oddities of illumination deserve no less.
Posted by Wayne R. at 10:17 AM