More on Heroic Classes for Holmes 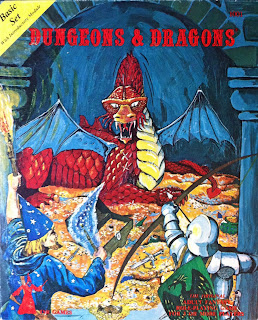 In my last post, I hinted at the idea of using expanded classes in Holmes Basic Dungeons & Dragons that only become available at 4th level. I don't like the term "prestige classes" because, to me, they speak of bloat and excess and character builds in 3.x D&D. Since in OD&D, 4th level equals Hero, I think that Heroic Classes is a more apt title.

The paladin in Supplement I: Greyhawk is, I feel, the archetypal heroic class. It has stringent requirements (17 Charisma, Lawful alignment, few magic items), and a fairly limited set of powers (lay on hands, immunity from disease, +2 to all saving throws, dispel evil at 8th level, Holy Sword, paladin's horse). This is a good template. I particularly like how the "dispel evil" ability is given at 8th (Superhero) level, since that firmly establishes a baseline of 2-3 abilities at Hero level, and another at Superhero.

Druids from Supplement III: Eldritch Wizardry would also adapt well; they get a separate set of spells from spell level 2 onward, with the identify pure water / plants / animals and pass through abilities at 4th level, and their shape shift gets moved back to level 8 - when it will be powerful but not overwhelming.

As for a new heroic class, I kind of like the idea of an Alchemist for magic-users. This would be something of a specialist in the creation of magic items - focusing on temporary and rechargeable items at 4th level, and permanent ones at 8th. One thing that would go particularly well with this would be an "identify" ability as a base ability. Of course, making magic items would take significant time and effort, and possibly some hard-to-find items. This pairs particularly well with the Holmesian scroll-making capability.

I think this could work without going too far overboard. I think keeping it sharply limited to 3 abilities plus 1 at 8th is a good way to start. One way to balance things out may be to create different progressions for heroic and non-heroic class characters. Basically, if you're a paladin, you get your abilities but stick with your base fighter progression; if you stay as a basic fighter, you get extra attacks, which are a very big thing in older D&D as I've mentioned before.

Now, the one thing about all this is that it kind of means I need to actually write a Holmes Expert expansion. So there's that. At least I can limit it to 48 pages.
Posted by Wayne R. at 10:15 AM