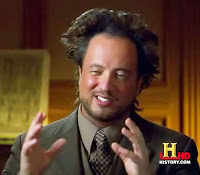 One of the phenomena of the pseudoscience industry (and I use that term purposefully) over the last few decades is the theory of "ancient astronauts." First spread by Erich von Däniken and used for commercial purposes by people like Giorgio Tsoukalos (the subject of the famous meme picture to the left), these use incredulity about the abilities of ancient civilizations and the building power of thousands of slaves to hypothesize that ancient wonders were not built by man but by extraterrestrial visitors.

But just because something is simply bunkum doesn't mean it isn't useful gaming material. Some critics have pointed out after all that "ancient astronauts" seem to have a basis in H.P. Lovecraft more than in any scientific observation. But if we take them at face value, they do give us some potential fodder. For instance, this Dogū statue from ancient (prehistoric) Japan has features that would be really interesting either on a space suit or on a monster straight-up: 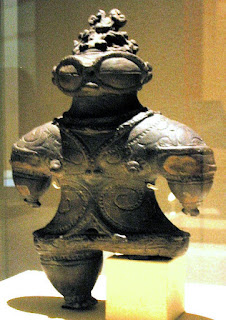 After all, with the goggle eyes, the weird armor, the cone helmet - that's gotta be something interesting to wear or to fight. Much of the ancient alien fodder is visually interesting. Can you really not think of adventure seeds with this guy? 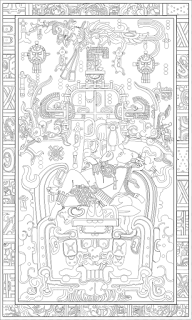 So there are several ways you could use the ancient astronauts.
Ancient tombs and pyramids are the obvious places to put these creatures; any dungeon that sits under or relates to a megalithic structure would really do. One thing I like is that it allows you to inject antiquity into the game (the ruins themselves are 2 or 3 civilizations old) - and it can be done side-by-side with death rays and force shields, without any incongruity.

Fantasy literature and RPGs both have involved histories with bunk ideas. Theosophy in particular I think had a big influence on fantasy, including on Lovecraft and again on the outer planes - we wouldn't have our astral and ethereal if people hadn't actually believed in them. In an age where there is bunk abound, it seems a shame not to turn some of it to good use.
Posted by Wayne R. at 9:16 PM