Every Wednesday on this blog is Cryptid Wednesday. I present one cryptozoological creature, written up for use in Swords & Wizardry. This one is from Africa. 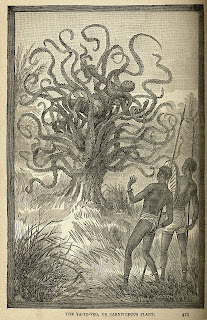 The ya-te-veo is a massive creature in the form of a tree with a mass of tentacles rising from a short, stubby trunk. It mostly subsists on insects and the odd bird, but finds human flesh irresistible whenever they come near. When it is dormant, the tentacles look like twisted, withered branches; several of them have eyes that resemble some form of rotting disease. It has a 3-in-6 chance to surprise a party unaware of its nature, with the chance reduced to 2-in-6 if the group contains a ranger or druid. It requires a Speak with Plants spell to speak with a ya-te-veo but it will not obey any commands.

Anyone struck by one of the tentacles must make a saving throw or be caught up in them. A target thus afflicted is crushed for 2d4 damage per turn until dead (or a reasonable approximation), after which the ya-te-veo will drag their body toward its many-toothed maw to eat. If the ya-te-veo consumes a human, the referee should roll a saving throw; failure means that it is sated and will slowly stop its assault after the next round.

The ya-te-veo takes only half damage from bludgeoning weapons. It takes double damage from any fire-related effect.
Posted by Wayne R. at 8:20 AM