Typology of Random Encounters: In the Dungeon 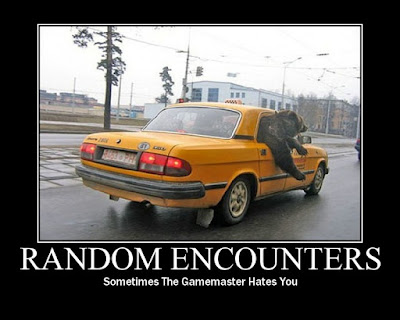 Most of my games this past weekend were driven by the random encounter. And, despite the image above, none of them were with bears. Although one was with a crocodile. That, along with general considerations about dungeon design, has me thinking about the types of random encounters you'll find in a large dungeon or megadungeon.

Type I: Faction Members. When you have a faction in the dungeon, it should be represented on the random encounter table, unless there's a good reason that its members stay put. So if there is a goblin tribe, a gang of bandits, or a cross-species evil cult, you should be able to run into them. This allows for PCs to figure out what else might be in the dungeon without knocking down every door, and provides opportunities for faction members who leave an encounter alive to tell their allies about the PCs' activities.

Type Ia: Factions without a Base. It's possible for there to be a faction in the dungeon that is an itinerant group. This should be a temporary condition; perhaps you have a group of cavemen who've wandered into the dungeon for shelter, or maybe a half-dozen goblins got away when the PCs beat their king. They will initially be "homeless" within the dungeon, but within a session or two, they may take over a cleared room.

Type II: Predatory Monsters. There are "big" monsters that have their own room in the dungeon, but logically will be wandering about looking for things to eat. It could be a pack of hell-hounds or the minotaur; whatever it is, it's not home. If the PCs kill a significant monster outside of its lair, of course, now they have to find its treasure before anyone else does.

Type III: Animals and Unintelligent Creatures. These are your Rodents Of Unusual Size, your skeletons and zombies, your oversized bugs and so forth. They are here on little more than instinct, and most are optional encounters one way or another. The PCs can throw some rations to distract the R.O.U.S., or have the cleric turn the skeletons, or just go around them and hope the reaction roll isn't an instant attack. (These encounters should always involve reaction rolls.) They don't have the same impact as faction monsters, although they may also come from another room. I particularly enjoy relatively innocuous animals like dungeon chickens (there is a coop in my dungeon).

Type IIIa: The Clean-Up Crew. Jellies, slimes, oozes, globs, glops, puddings, molds, blobs, and various other unwholesome growing things come along and eat dead stuff. Sometimes they convert the PCs into new dead stuff to eat. These come in particularly handy if the PCs are in an out-of-the-way corner and you roll a random encounter.

Type IV: Non-Player Characters. In the encounter tables for older editions of D&D, NPCs with classes and levels were regular entries. (OD&D used the level titles for this, which is great if you remember the level titles.) They are distinct from faction members; generally once somebody has at least 2 hit dice, you should think up a name and a background rather than leaving it at "bandit #479". Fighters and thieves may have hirelings; wizards may also have familiars; clerics are more likely to have acolytes. They may have a relationship to one or more factions, and in time may constitute a faction in themselves. It's also entirely possible that they will join the PCs, and if they do so, they could also betray the PCs. Sure it's possible for bandits to do that, but in my experience PCs get stabby once someone says "stand and deliver."

Type V: Wandering Oddities. Perhaps the most neglected category, strange and wondrous effects can sit on the random encounter table along with all kinds of monsters. This can be as simple as an unknown sound, seeing a figure disappear around a corner or down a hallway, optical illusions, or even minor magical effects. This is a good way to reinforce a theme throughout a dungeon or dungeon level without necessarily dedicating a room to it or hammering it home constantly. It could be a detail like a particular fungus that is growing in this level, or mini-features like having carvings left behind by the cult that is operating nearby. This makes the dungeon a richer and stranger place.

Each of these types feeds back into solid dungeon design, and helps tie together a living environment that has strange and wondrous features. Featuring multiple examples of each type should help fill out that encounter list without the exploration feeling like a slog.
Posted by Wayne R. at 5:01 PM