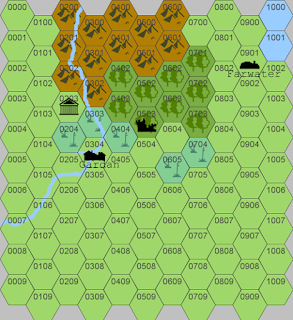 A partial map made by players in my Sunday AM D&D campaign showing the Fazren Hills and the town of Farwater.

I've been using the Rules Cyclopedia and have to say that I've been enjoying it. We're using the optional skill rules, which add a very minimal but useful layer to the game. They're built on top of the "roll-under" system familiar to most B/X players, and add depth without dominating the way the game is played.

A couple of encounters in today's game were interesting even though they didn't result in direct interaction between the PCs and monsters. We've been playing in hexcrawl style, and the PCs were heading out at the north edge of the woods; I rolled an encounter overnight and it was a dragon. The characters had cover from the trees above them, and I only gave the dragon a 10% chance of noticing them and taking interest. The dice didn't show that, so I let the dragon fly over and focused on the incredible noise of its wings as it flew by in the early morning hours.

Later, after the PCs had secured a big treasure, I rolled another encounter in the overnight. This time it came during the dwarf's shift to watch, and a couple of elves were rolled. (Of course the dwarf was up for the elves.) I had them avoiding the PCs' campfire, and it wound up being a case where neither side wanted to approach the other.

Both encounters served to give a sense of depth to the world the PCs are in. Neither was actually about them at all, but instead just things they happened across. It's a richer place because it has things totally removed from the PCs and what they're doing. Also - having a dragon in the second adventure, even just a fly-by, simply feels right in a Dungeons & Dragons game.

One resource I used was the d30 Sandbox Companion by Richard LeBlanc. It's a really nice booklet, although I'm very much tempted to roll up a week or so of weather in advance of next week's game. It's a very good system for having weather actually happen during a wilderness exploration, it's just a thing that takes a minute out of the game when you actually roll precipitation.

Between the two was a short dungeon trip with a significant treasure. It will be interesting to see if the PCs go back next week for more - and if they find out what else was in the ruin they were exploring.
Posted by Wayne R. at 6:35 PM