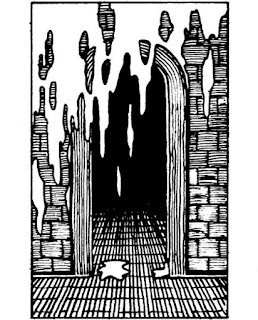 Both of my A/D&D campaigns ran within two days of each other, so this is a double dose of actual play.

In my AD&D game, the PCs finished exploring a map that we had started way back in September. The dwarf got turned into green slime, but the cleric and paladin did nicely. The magic-user that the dwarf's player rolled up came with a fresh rumor (I'm as subtle as a brick, right?) of a dungeon to the northwest with orichalcum. The characters went in and saw a lot of statues, some of which caused intense delusions, but mostly didn't interact with them. The PCs had their first encounter with a dungeon chicken. Then there was a room with beastmen which prompted the comment: "Far be it from me to make presumptive comments about the tastes of wolf-headed men."

A non-encounter encounter with the dungeon cat preceded a pair of Selenites. I played them up as hostile, and they had a paralysis ray that zapped both the cleric and the paladin before the men-at-arms made short work of the moon men. This got the PCs the paralysis ray as their haul for the dungeon so far. 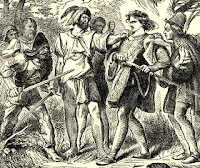 This morning I ran Sunday AM D&D, and prepared two potential adventure sites; of course the PCs didn't reach either. There was a non-encounter encounter with giant ferrets before they ran into a lot of difficulty getting across the river. I rolled up a troll on the encounter list, so of course it was living under an old bridge. The PCs wound up in a war of words with the troll but they were mounted and it didn't pursue them out of range of its bridge.

They went upriver and found a hillbilly named Bartto willing to row them across, but he couldn't take their mounts. They went further up and found a ferry, but it had been taken over by militant peasants (or bandits depending on who you listen to) who were immediately hostile and suspected them of being royalist spies. They went back to Bartto's crossing and overnighted, when I rolled another encounter - a giant crocodile - and rolled that it surprised them. This turned into a nasty shock when Bartto was rolling across the river, and the dwarf managed to get the boat across the river, but Bartto and the party's Magic-User, Treb, did not make it. They made their way down to the river town and found that this part of the world had a lot of tension related to the uprising upriver.

But these posts are about the lessons learned from running games, so here they are.

1. Encumbrance is a pain, but it generally works. AD&D 1e has a particularly brutal encumbrance system in terms of its requirements, but it makes players very conscious of what their characters are carrying and wearing around. My players look for ways to lighten their loads actively, including it as a factor in choosing armor and so on. I know it's a pain in the ass to track, but in an exploration game - which is what I'm running at its core - it really makes it feel more like you're making meaningful decisions.

3. The encounter charts in the Rules Cyclopedia are great. They encapsulate a lot of the ideas of the B/X / BECMI line, and feature some really neat animal encounters. They're a very good tool for wilderness hexcrawling. They've really fleshed out the world of the Sunday AM D&D game in a way that is fun to run.

4. So much of what actually happened in these games was driven by random encounter tables and reaction tables. For instance, the ferret non-encounter was a sequence of rolling "neutral" on the encounter charts, and played out with both sides avoiding each other. The insurgents, on the other hand, immediately rolled a "hostile" result toward the PCs. When I don't have a particular answer to a player question, I assign a percent chance to it, roll percentile dice, and improvise something from the result. I'm very happy where I am with this in exploration games.

5. It was fun to have both the full dungeon experience (which the AD&D game went into) and the full hexcrawl experience (as we hit it in the Sunday AM game).

The last thing to note is how good it is to be gaming regularly. And regular games, of course, mean more frequent blog entries. I'm not exactly at a regular clip but this January has been pretty good for a recent month, and I hope to keep the current pace up.
Posted by Wayne R. at 1:40 PM