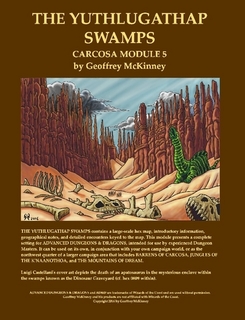 While I don't really do a lot of reviews, particularly because for RPGs I think playtest reviews are more useful than "I read this" reviews (excluding Bryce Lynch at tenfootpole.org, who has objective criteria and does a heroic number of reviews). But I think Initial Thoughts are a good way to put forward my first impressions of a product, and it's a good way to indicate that my thoughts might change over time.

The Yuthlugathap Swamps is one of four first edition AD&D modules released by Geoffrey McKinney (all four are on Lulu here) for his Carcosa setting. Originally released as a very controversial OD&D supplement in 2008, Carcosa got an extremely deluxe release from Lamentations of the Flame Princess in 2011. These don't require either.

It's rather confusing that Geoffrey called this "Carcosa Module 5." He's said that his goal is to re-release the hex map for Carcosa in four more modules following the same format. Eventually modules 1-4 will detail the original map, and 5-8 detail the four map quadrants due south of it.

The new modules are first edition AD&D modules and assume that you have the first four AD&D books. It works better if your copy of Deities & Demigods has the Cthulhu mythos; if it doesn't, you might want to look here. If you are used to Carcosa following an OD&D or LotFP type of system, this will require a bit of adjustment. The adventures repeatedly reference AD&D monsters (in Yuthlugathap, primarily Lizardmen and various slimes and oozes) and spells in a way that previous Carcosa material did not.

In terms of presentation, it is bare bones. Each module has a color cover image in a style generally reminiscent of old TSR modules. There is a hexmap on the back, printed in color. Unfortunately the map is not reproduced in black & white on the interior; this would have made the numbers easier to read. As it stands, some of them are almost totally illegible. The interior is two-column text laid out pretty much like Geoffrey's line of Psychedelic Fantasies modules. There are no interior illustrations, and there is a lack of page numbers.

After a brief overview, the module consists of a series of hex descriptions. A lot of the entries for the Yuthlugathap Swamps are descriptions of Lizardman strongholds. There is a clear rivalry between the various tribes that is set up in a huge, deadly web of conflict. Characters can get involved in this, and the module could probably be used as the basis for a Diplomacy-like scenario with players taking the parts of various lizardman tribe leaders.

Human tribes are scattered mostly to the east, some pretty good and one quite horrible. There are a number of dinosaurs and Spawn of Shub-Niggurath scattered around the swamps as well. The Spawn are always given some kind of unique twist. A few aren't at all malevolent or even very harmful to human life.

Then there are the really weird areas, which are solid gold. These are the kind of things Geoffrey excels at, and they're evocative and flavorful. Some give wondrous boons, including a number that teach magic-user spells. Others give horrible banes. My favorite reference is that there is a Pillar of Tsathoggua that involves the geas spell (a nod to Clark Ashton Smith's "The Seven Geases"). The Ghost-Lights are a great twist on the traditional Will o' the Wisp, with various odd effects from contact such as having to eat more or becoming amphibious and needing to be submerged in water daily.

All of the entries are solid. There's not much here by way of space aliens and technology, which I think is a function of most of this module being swamps; peeking ahead, Barrens of Carcosa seems to have more technological wonders. Sorcery seems to have been either left in the northern part of Carcosa or simply not mentioned in favor of AD&D magic use. This is jarring for those who are accustomed to either OD&D or LotFP Carcosa.

At the going rate, there are definitely $12.99 worth of ideas in this module. A bunch are really wonderful. You could do an interesting hexcrawl in the godforsaken swamps of Carcosa or adapt a number of the locations to a different setting. I'll be doing a similar Initial Thoughts entry at least on Barrens of Carcosa.
Posted by Wayne R. at 8:10 PM