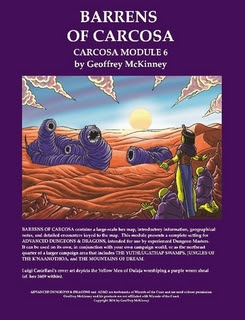 As with Carcosa Module 5, The Yuthlugathap Swamps, Barrens of Carcosa is a 32-page saddle stitched AD&D module by Geoffrey McKinney. You can buy the module on Lulu.

Barrens has no art aside from the cover piece by Luigi Castellani. It suffers more acutely than Yuthlugathap Swamps from the print quality with the color hexmap on the back; since most of the hexes are a tan color, the numbers are almost completely illegible. You more or less need to reference nearby hexes to have any chance of figuring out what the number on a tan or yellow hex is.

The last page of each module notes that four more Carcosa modules will be forthcoming as well as sixteen "Wilderness" modules. This is a rather ambitious plan, to be certain!

In terms of its content, Barrens of Carcosa is a step above the Yuthlugathap Swamps, and I'd suggest reading it first. Not having to go through quite so many lizardman strongholds means that there is more room for the weird content that Geoffrey specializes in. There are many more villages and generally more humans in the Barrens, including a few small jungles and a modest desert.

The Cthulhu Mythos looms much more present in Barrens of Carcosa. There are several Great Race appearances, multiple cults, and the excellent City of Pillars ruled by Alhazred himself (and, of course, a copy of the Necronomicon). This last area is implied to be an area worthy of its own module detailing both the city and the dungeons of Alhazred below.

High technology themes also come back into the setting here, with a few powerful technological areas. One small village goes into orbit periodically, and there is a powerful Overmind in a corner of the map. It was a relief to see that this theme is still present, although not very thoroughly so. I found the suggestion that the orbital village's technology doesn't work outside of its hex really disappointing, the kind of "only in this area" effect that cheapens modules.

Fewer of the hexes are concerned with learning magic-user spells, although there are still a few of these. There are a decent number of Spawn of Shub-Niggurath, and many are connected in some way to an adjoining hex. One strength of these modules is that a solid minority of the entries have clear ties to another location. A couple even reference the hexmap in the original Carcosa book.

There are some deliciously double-edged encounters in this book, particularly the Logician (hex 2811) and the village of Ullcha (hex 3001). These go much beyond the simple theme of threats and have both wonderful and horrible things in them. I won't go into detail, because you should read about them yourself.

The hex description format feels more claustrophobic in Barrens than it did in the Swamps. There are more entries where a full monster write-up would be useful; for instance, the giant scorpions in hex 3209 would have been welcome as a Monster Manual type of entry. And there just isn't enough given in the write-ups for either the Orbital Unit or the City of Pillars; either would require a great deal of prep by the referee before players stumbled into them.

It becomes increasingly clear that Geoffrey's art-free interiors are a weakness of the offering. One of the main reasons is that a good idea is hard to find again when flipping through the module. Illustrations, even fairly crude ones, provide solid mental references to remember where a stand-out piece of content was. The organization, which relies solely on hex number (there are no page numbers), tends to compound this in the modules. It also would help in the case of Geoffrey's unique creatures, which are always freakish and benefit from the pen of an illustrator, as seen in Isle of the Unknown.

Not having any art or any text outside of the hex descriptions (plus the brief overview of Carcosa at the start) also severely limits the modules' ability to offer unique details. There are almost no unique "magical" items, although there is an Elder Sign or two. No spells are present except ones already found in the AD&D Players Handbook, which is deeply disappointing for a setting that had previously taken a totally iconoclastic approach to magic. This makes them really difficult to slot into an existing Carcosa campaign with sorcerers instead of magic-users.

(I do know from the original Carcosa and the Psychedelic Fantasies modules that Geoffrey tends to put things out in this format; but information design has come a long way in the OSR and it is a step backward to have a plain layout with no art. And it's particularly painful after the LotFP releases.)

I also have a small quibble about the treasure present. Despite the general lack of hard currency or sources thereof in Carcosa, treasure listings tend to feature standard AD&D coinage (copper, silver, electrum, gold, platinum), and sometimes uses four or five coin types. This is a minor annoyance but it does not feel right for a weird setting. Defining one coin type and sticking to it would have been more in keeping with the tone of Carcosa.

I also find the division of the books into four modules distracting. Each covers a hexmap in some detail, but it doesn't feel appropriate to have them broken down in the way they are. There is no progression through the four modules, and vanishingly few references to other modules in the text. A unified index for the four books would really have helped. One has the sense that the division is to follow a pattern rather than out of necessity.

To be clear, these are my reservations with a book whose content I find very strong. I offer them primarily because I think it could have been really an incredible product if Geoffrey had chosen to do these as a follow-up to the LotFP Carcosa tome, using the same system, with a crowdfunding campaign allowing lavish illustration throughout a single hardcover book. There are some great ideas in these modules and they are worth picking up, but they're a step backward in a lot of ways from the releases that have been done through LotFP.

If you like Carcosa-style hexcrawls, this is definitely worth the $12.99. There are a lot of encounters in this book that are worth the cost of admission, and as with many products like it this can be mined for details in a campaign that doesn't strictly follow Carcosa.
Posted by Wayne R. at 7:32 AM