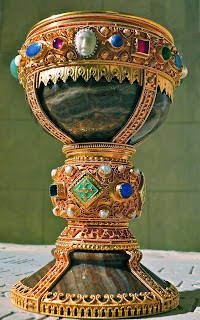 I've started working on a megadungeon again, and as such I've been thinking about them lately. (It was initially called the Red Keep dungeon, but since I realized I'd cribbed that unintentionally from A Song of Ice and Fire, I'm just going to call it the Castellan Keep dungeon. Yes, it's set beneath a ruined version of the Keep on the Borderlands.)

This thread on the OD&D forums had me look back through Monsters & Treasure. Toward the end of that booklet is a short list of artifacts: a Teleportation Machine, separate Crown, Orb & Scepter for each class, and the Stone Crystallization Projector. The latter is obviously the fun one, although whether it's a crystallization projector that turns things to stone, or a projector that crystallizes stone, is up to an individual referee's imagination. Eldritch Wizardry, of course, added the whole array of now-familiar artifacts to the game. They are the best treasures that D&D has ever come up with, but are rarely presented in games because they're so powerful.

It strikes me that the deep levels of a megadungeon are possibly the most natural resting spots for artifacts. After all, if the Invulnerable Coat of Arn or the Sword of Kas is just sitting within 600' of the entrance point of a dungeon, why hasn't someone already come along and taken it? If there are a dozen layers of dungeon and monsters between it and the surface, well, that makes a bit more sense. Especially if the artifact is Lawful and the monsters are Chaotic and can't use it. Or the artifact is Chaotic and the monsters do use it.

Deciding that an artifact is in a megadungeon adds a powerful thematic element, and a fascinating high-level motive for characters to keep questing. When you get to the level full of wild boars, the idea that there are secrets beyond simply lots and lots of monetary treasure in the dungeon becomes a relevant question. "We have to keep pressing on or we won't find the Spear of Longinus!" Well, it's worth a thought, anyway.

The PC party doesn't need to be the only group trying to get to the artifact, either. If there's a rival party trying to make their way toward a given artifact, it can create a time tension that can otherwise be missing in the megadungeon environment. One of the truths of D&D is that it's a more challenging game when there are time constraints and a PC group can't simply go rest after every major fight. Another way to bring time-pressure is to tie an artifact's effect to a particular temporal or astrological event. Perhaps the door to the room containing it only opens on a certain day, or when the stars are right, etc. There are a lot of options here.

A megadungeon environent also adds a potential solution to the power dilemma. For one reason or another, the artifact may not be removable from its present location. One very good reason for this is to simply make it too large to physically move, or tied into the physical environment. If the artifact is a statue that grants Wishes or a Fountain of Life, but you can no more take it out of its current room than you can remove the room from the dungeon. That is to say, sufficiently clever players will find a way.

Magical limitations can also stop the artifact from being removed. There are parts of the Holy Grail myth, my favorite being the climax to Indiana Jones and the Last Crusade, that make it so the Grail simply cannot be taken out of the cave where Jones finds it. That's a shame, too - imagine the good it could do to the medical community. But such are magical artifacts, at least until you find that Wish granting statue and use it to change the rule about no removing the Grail.

Artifacts being part of the megadungeon are a strong support of the theme of the dungeon as a mythic underworld. By their nature, artifacts shape and change the setting around them in ways that are not entirely logical. Following this logic, the referee might even think of the artifacts as part of what "powers" the megadungeon and keeps it weird. Of course, this requires the kind of artifacts that you can't remove, or otherwise the dungeon would go away, or change fundamentally.

Once PCs reach the artifacts in a dungeon, in some sense they should be changed forever. Galahad ascends to Heaven once he finds the Grail. It's not entirely out of the question for PCs who've found a dungeon's deepest and greatest secrets to go to another plane (or another planet). Even the chute on level 13 of Castle Greyhawk, tongue in cheek as it may be, takes the character who's traversed its depths to a new world. Other changes might include some innate ability or physical sign of change.

As a general rule, it's worth taking a lesson from Dungeon Crawl Classics and Lamentations of the Flame Princess, both of which have lots of effects that permanently alter characters, and building such changes into a megadungeon's "big" features. It fits within the mythic underworld theme as well.

The choice of artifacts might seem like an odd place to start fresh musings about megadungeons, but it's not. I think that, to the contrary, deciding what lies deep beneath is a great way to build the dungeon in ways that lead organically to it. If you know that level 12 is going to have the Holy Grail, you can begin to put allusions to Arthurian myth in your dungeon, and so on with other themed artifacts. Players will get more out of the dungeon if it seems to be leading somewhere rather than just being a massive underground zoo. That's not to say that the megadungeon is plotted entirely in advance - it shouldn't be - but its big ideas should be informing it from the word "go."