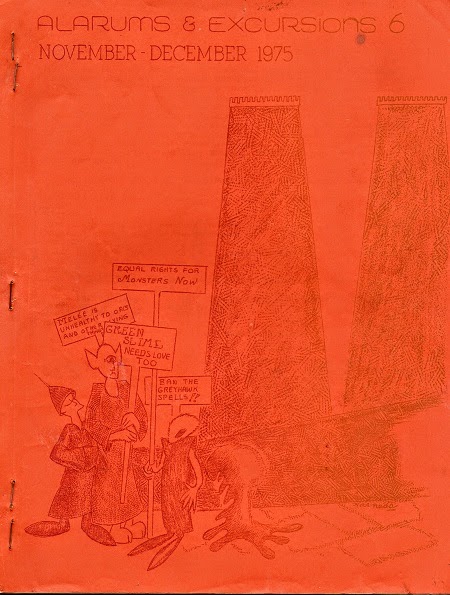 Jon Petersen, in his Playing at the World, spends a bit of time with Alarums & Excursions. The zine's early years focused heavily on actual play reports. Because Lee Gold sent me the copies that I have with the understanding that they were still copyright their original authors, I am generally loath to do too much in terms of extensive quoting from them. But I want to give a paragraph from issue #9 (March 1976), which fit in nicely with some points I've made recently about robots. Note that this isn't the 6th issue pictured, but I needed a pic of a contemporary issue of A&E.

The below is from the section "Fornholt's Mockturtle Quest" by Hilda C. Hannifen.

It's important to know that the characters at this point were circumventing a "hot" room which had some "Godholm" material (and radiation), and one of the PCs, Tedron, had turned into Efreet form temporarily to withstand the heat. They have just walked into a room with a cabinet that has 6 doors, and a door that should see them clear of the radiation area.


As we advanced into the room which had the cabinet, the last in line noticed a sign on the outside of the door light up: "Game in Progress." The door swung to of itself and refused to open. 3 Doors n the cabinet opened and out of the cubbyholes came 3 robots with weapons and a target-painted shield. Each had 24 lights: none glowing. We found no matter what the weapon +s or strength, the "damage" was only the weapon's basic damage as if non-magical; damage was reflected by the number of lights lit on the robot. Certain hits lit double the ordinary number of lights. Owen rolling hot (a 17 was needed to hit) was able to get Turan's robot out of the way quickly (Turan had only 18 HP so he had to be quick) and Bruciver finished his shortly thereafter. Tedron didn't do so well with his since it did not want to get too close to his "hot" armor. Instead he maneuvered it towards the corner which was slagged where its positronic brain malfunctioned. Each of the 3 fighters had to fight a robot and got a 5000 GP piece of jewelry as a result. These were dueling dummies they had fought.

This immediately precedes a troll encounter. I get the feeling that it wouldn't have been out of place in the parts of Greyhawk that inspired the Machine Level and so on: an encounter that is quite serious, but at the same time is whimsical enough to have a "Game in Progress" sign light up. The California dungeons were different but the spirit is less far off than people think.

A few fun things come out of this. First, an idea that robots are somehow immune to the bonuses for magical weapons and the effects of high Strength. It's a neat twist in the rules, and the kind of thing that can freak out players who are quite confident in their high-level PCs. Second, the way Tedron beats his dueling robot. Maneuver like this is something that's natural in old school D&D, or at least should be; the combat system is simple but it's really meant to be run with positioning as a "natural" part of it.

Of course the robots had positronic brains; that simply seems natural for a '70s robot. (One suspects that, being in a dungeon, these "dueling dummies" may not have obeyed the Three Laws of Robotics.) But those 5000 GP pieces of jewelry - I wonder where they came from? Maybe out of a compartment in the robot, or out of the cabinet. It puts me in mind of a dungeon version of a boardwalk arcade game.

This is all very "funhouse," but to me it's a wonderful example of the kind of weirdness that permeated the early years of D&D.
Posted by Wayne R. at 11:25 AM