Dungeon Markets and Other Neutral Spaces 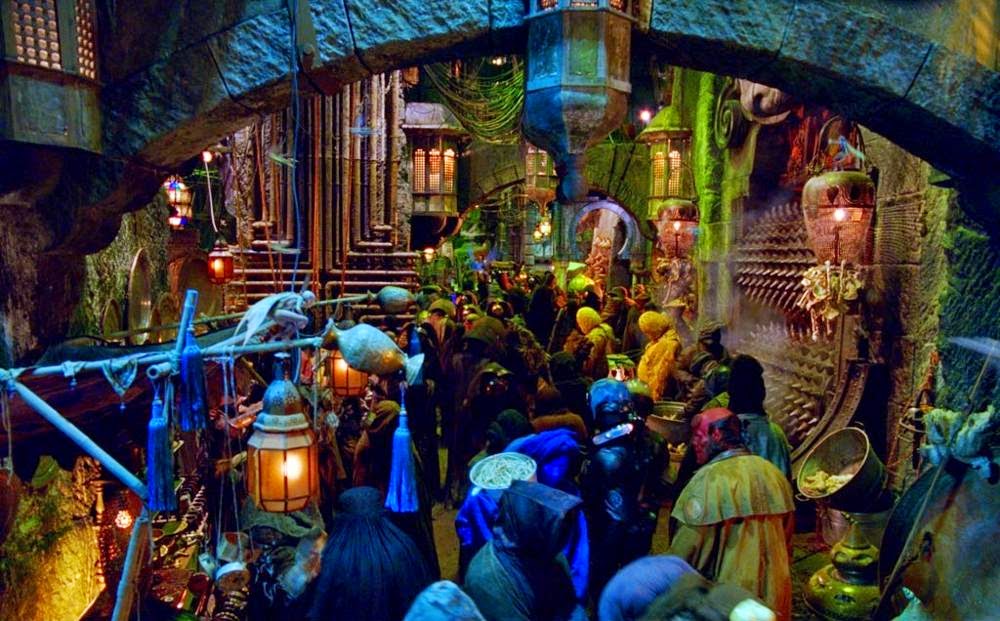 Guillermo Del Toro's 2008 film Hellboy II: The Golden Army has a wonderful sequence where the heroes have to go into a hidden "troll market," filled with all kinds of weird creatures, as part of their investigation. This is a long scene full of wonderful visuals; Del Toro is a genius and he clearly gets to let his imagination run wild here. It's also an idea I quite like, and I find a good analogue in the Plaza of Dark Delights from Fritz Leiber's "The Bazaar of the Bizarre."

Michael Curtis's Stonehell megadungeon has a small kobold market on level 1, but it doesn't really have the same kind of flair that the Troll Market did. The 13th issue of Fight On! does have a neat table for the "Goblin Market" that I think hints at the kind of wonder that Del Toro managed to create.

The central idea that I like here is that there are spaces in the dungeon where a sort of "armed peace" is maintained, however tenuously. The idea of the market or bazaar implies a particular sacrosanct character, where people and creatures are generally not killing each other and taking their stuff. Of course, this can be broken for a wide variety of reasons, but overall the character of the market is one of neutrality.

What I think is important is that such a thing is not in any way a "magic mart." The things for sale should be strange and wondrous, and not always available for something so mundane as money. There is ample precedent for such markets to be covered in webs of illusion and full of wondrous things, as well as dross posing as the same. Dangerous bargains and barters should be possible, from selling one's soul to requiring unusual items or dangerous favors in return for a good or service. And of course the issue of slavery is always a possibility here.

It's a natural place for NPCs to be found and get more information on the dungeon; this is likely to be a rare and precious commodity. Witches, representatives of dungeon factions, and all the other elements of intrigue in a faction dungeon are possible within the market. Indeed, it's simply brimming with possibilities for bargains and backstabbing.

Neutral ground, by its necessity, will be governed by some rules that keep it from being a free-for-all of murder. Maybe it is under the protection of one faction, or maybe governed by a truce between two or three factions. In either situation, there is likely to be some enforcement of a "don't kill everyone" rule. Given the morality of the dungeon dwellers, it may not be too heavily punished; there may be a tax like a weregild on murder, or permanent exile from the market, or worse. Of course, this sets up an obvious giant chaotic scene where the neutrality of the market is violated and everything goes to Hell in a handbasket.

The other reason I like the market in particular is that it's not necessarily permanent. Access may be limited in time; there may only be a market day on Saturdays, or only for a week at a time, leaving the space open to other uses in the interim. There may also be a special access to the market, such that PCs wouldn't normally be able to access it, and getting in may be itself a reward. Having things like this makes time meaningful and gives the dungeon the feeling of being alive.

Different sorts of neutral spaces may be present as well. For instance, it's conceivable that there is an arena in the dungeon with gladiatorial combat, or one faction may control an area and allow others to use it for certain purposes. These can also vary with how strongly they are neutral for the PCs as opposed to for other factions, depending on how PCs relate to various groups within the dungeon.

I'd love to hear of any experiences with markets or other neutral places that readers have used or seen in dungeons.
Posted by Wayne R. at 4:32 PM