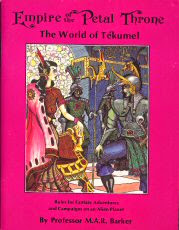 I've been taking a look at M. A. R. Barker's Empire of the Petal Throne specifically for what rules content it contributes to the original Dungeons & Dragons game. EPT was such an early variant, and deeply tied up in the Wisconsin and Minneapolis scenes and early TSR, and as such the ways its rules expand upon OD&D are interesting even for campaigns not set on Tékumel.

Probably the best known of EPT's rule changes is the idea that players re-roll hit dice each time they gain a level. This makes sense of the OD&D progressions, which have bonuses that appear and disappear over a PC's career. Re-roll, and your HP total can't go down. Simple and a fairly popular choice in OD&D.

Less discussed is EPT's damage, which until recently I hadn't looked deeply into. There are two simple changes. First, two-handed weapons do 1d6+1, and two-handed swords specifically do 1d6+2. This is a good alternative to the popular "roll 2d6 and take the higher result," though both are perfectly usable. The second damage rule is that a natural 20 (using those words) does double damage, with the possibility of an automatic kill if the character rolls a second d20 and gets a 19 or 20. This is a 1-in-200 chance; not exactly devastating. It's the first recorded instance of the simple critical hit rule of double damage.

The one I think gets the least love, though, is the damage by level versus enemy hit dice. Basically, at 4th level PCs get 2 damage dice versus 1 HD creatures. This increases at subsequent levels. This is the whole chart: 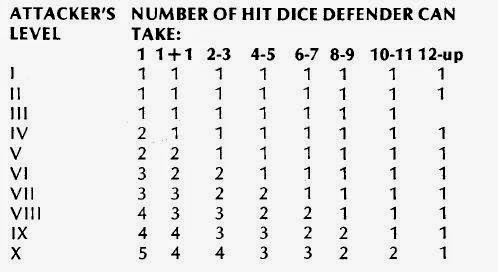 This seems quite odd; after all, how can a 1 HD creature take 5 dice of damage unless the first four are 1s? But in EPT, excess damage goes onto the next opponent, in a sort of prototype of the "cleave" maneuver. So a 10th-level fighter might take out five or six 1 HD opponents with that 5d6 damage.

In the OD&D FAQ, there is a basically similar rule implied: fighters get one attack per level against creatures of 1 HD or less. But that doesn't scale well to opponents that you'd fight at higher levels; unless you are literally taking on hordes of orcs or bandits, mowing them down in the mighty-thewed barbarian style, it's not half as useful as the EPT system. It's a more interesting interpretation, and it has the benefit of greater simplicity: there is only one to-hit and one damage roll.

The EPT damage system has another factor in its favor: one attack might be different from the next. If 5d6 come up right around their average of 18, it could kill three 1 HD creatures with 6 HP each, or nine with 2 HP each. This is more interesting than having to sit through 10 to-hit rolls, 10 damage rolls and the resolution of whether or not the lord has slain all the orcs yet.

If you don't have it, you should pick up the PDF of Empire of the Petal Throne over at RPGNow, and if you're really an enthusiast the Green Cover original manuscript that contains the version Barker put in limited circulation back in 1974.
Posted by Wayne R. at 4:55 PM