1974 was an interesting year for OD&D to come out. It sat at a critical point in the development of fantasy as a genre that we easily take for granted. The sword & sorcery genre that had sustained Gary Gygax through his youth was in its resurgence, while Tolkien was moving into dominance via the unlikely route of the counterculture and the Ballantine Adult Fantasy line was cycling older material back into the genre. Fantasy literature as we now know it was not yet a coherent genre with standard assumptions.

The idea that D&D is a game primarily about "fantasy" in the post-Tolkien sense has always had a touch of historical revisionism to it. It has Tolkien elements, but these are strewn about with ideas straight from myth, others from the sword & sorcery lineage, and fresh inventions alike. Much of what has gone on in the OSR is about cutting out the more Tolkienesque elements (or distancing them from Tolkien) and playing up either the sword & sorcery or the weird elements, or both. This is sometimes done under the cover of "Appendix N," but it really has little to do with Gygax's list of favorite novels, which contain heaps of science fiction anyway.

In Monsters & Treasure, plenty of science fiction and science fantasy creatures appear: Martian creatures are suggested, as are giant insects, dinosaurs and others. But the really interesting find is under "Other Monsters," which contains a listing for "Robots, Golems, Androids" that reads: "Self-explanatory monsters which are totally subjective as far as characteristics are concerned."

Golems later became codified as enchanted beings, growing greatly removed from the creature of Jewish folklore into any wizard-made construct. But robots and androids were swept under the rug along with the Martian creatures after the original boxed set. Indeed, unlike several other categories of additional monsters, they never even make it to The Underworld & Wilderness Adventures. But they have fascinating implications for referees who want to add science fantasy elements to their settings.

Again, keep in mind that it was 1974 when OD&D was released. The robots that most people were thinking of probably looked like Robby the Robot from Forbidden Planet: 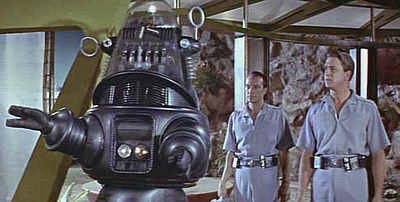 So if robots were self-explanatory, they probably looked in the imagination more like Robby or the robot from Lost in Space than our more contemporary references for robots. Androids were, ironically, probably cheaper to film but only catching on around the time of OD&D. Of course, our imaginations hardly have to be limited by what someone in 1974 would've seen as a robot; I simply think that it would be awesome to put something that looks like Robby the Robot in a D&D dungeon.

In an otherwise pseudo-medieval world, why exactly are there robots and androids in the depths of dungeons or lurking in the wilderness?

There's always room for ancient astronauts, or even more recent ones. It's also possible that the D&D world is actually long after an apocalypse in a highly technical civilization; after all, Planet of the Apes was current and had pulled off just such a trick. (This is also suggested by Appendix N, where post-apocalypse books like Hiero's Journey and Sign of the Labrys were recommended, but that was 5 years after OD&D.) There's planar travel, and if all else fails, there's the old excuse that "a wizard did it."

Robots can take any shape we like. Clockwork beings might be a closer aesthetic fit to much of what people like in their D&D; I think the visual design of the Golden Army from the second Hellboy film has a lot to recommend in this genre. But really there's no limit; robots don't even have to be anthropoid. It could be like the Terminator, or like an industrial robot arm from a modern factory, or small robots like the mouse droid in Star Wars.

One consideration a referee should give to robots is whether they are adapting their environs to their high-tech nature, or vice versa. Maybe a robot has made an area of a dungeon into a high-tech laboratory, replete with inventions and attempts to replicate its own technology level. Or it could have adapted to the low-tech but magical world it finds itself in, for instance with plate mail bolted onto its chassis or embedded a magical gem into its circuitry.

The possibilities really are endless, all from two lines in OD&D. That's some kind of magic.
Posted by Wayne R. at 8:04 PM