Monsters can be lured into service if they are of the same basic alignment as the player-character, or they can be Charmed and thus ordered to serve. Note, however, that the term "monster" includes men found in the dungeons, so in this way some high-level characters can be brought into a character's service, charisma allowing or through a Charm spell.

This is something that I know Mike Mornard has talked about several times with relation to Gygax's Greyhawk campaigns: the dungeon should be fertile ground for retainers.

Recruitment from adversaries is something I think has gotten neglected in OSR materials, and in later editions of D&D. The text above comes shortly before the reaction table, which in itself I think should be used more frequently. In my experience, roleplaying in the dungeon or wilderness has an interest element to it that you just can't get in a city, where the negotiation could lead to violence at any moment. 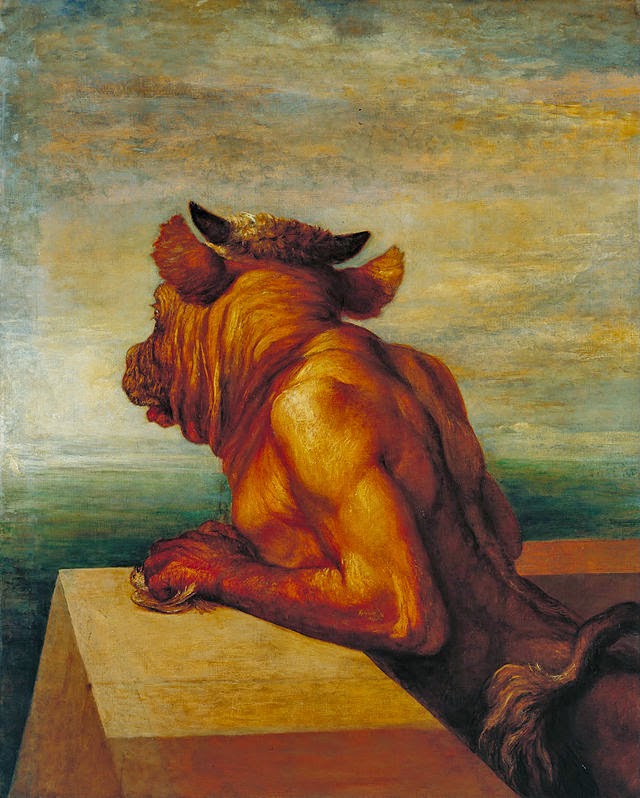 The point about the "same basic alignment" is much more interesting in OD&D than in classic or advanced D&D. Lycanthropes can be neutral, as can orcs, ogres, dragons, wyverns, centaurs, hydrae, purple worms, sea monsters, chimerae, minotaurs and giants. Among the types of men, Bandits and Buccaneers can be chaotic or neutral (50/50 chance); Berserkers, Cavemen and Mermen are all neutral; and Dervishes are lawful. This makes neutrality really interesting as a choice, because a lot of monsters might turn out not to be Chaotic after all and can be lured into service.

Flexibility of alignment is an important idea for this. If orcs are always chaotic, then an encounter with them has fewer possibilities, because a neutral PC can't lure one into service. The same is true of bandits: the 50/50 chance of them being neutral should guide the referee in how they are played. When creating new monsters, I think such questions should be considered in some instances. After all, goblins and trolls only appear in the chaotic column of OD&D, and won't be attracted by offers from neutrals. But even if you aren't using the "vanilla" monster list, your encounters wind up richer if it's possible to recruit some of them (or if PCs even seek out neutral monsters to hire).

It's also worth realizing exactly how powerful the OD&D version of Charm Person is, because it's easy to forget if you're not reading the booklets: "If the spell is successful it will cause the charmed entity to come completely under the influence of the Magic-User until such time as the "charm" is dispelled (Dispell Magic)." Supplement I: Greyhawk introduces limits on Charm that make it substantially less permanent (the system of multiple saving throws that makes it into classic and advanced). But in OD&D it's an instant henchman, if you want it - a failed saving throw is all you need.

Such henchmen give great potential reactions for subsequent encounters. Elves encountered in a dungeon may see a human with an orc and minotaur in tow and make the assumption that they're monsters to be defeated at every cost, and the human is either in league with them or a hostage. On the opposite side, an ogre guard could be the PCs' key to getting into a fantastic environment like the troll market in Hellboy II. A given monster could take the PC as a threat, or as a "monster" human allied with monsters.

Of course, turnabout is fair play; if the PCs can try to lure monsters into service, then monsters should also be able to do the same for them. Flexible alignment makes a great way to do a theme dungeon: monsters that are neutral or chaotic are the ones that are likely to try and hire PCs, while chaotics will tend to stay away from them, being on different "sides." And there's a tremendous amount of roleplaying to be done with regard to how far the PC(s) and the monsters trust each other.

In the civilized world, this will definitely have various implications. One scenario is the, "Damn it, Theseus, you were supposed to kill the minotaur, not help it escape!" variety where the monsters are treated as such and the PCs considered evil or reckless for accompanying them. And there are all kinds of possible responses, from betrayal of the monster hirelings to various shenanigans to help them pass. But the opposite choice has a lot of possibility for world-building.

OD&D does seem to indicate a world where monstrous creatures are sometimes in the employ of non-chaotic humans. It's also got a very Judges Guild vibe if you think of a village where you might go in and see an ogre – who in fact hauls very heavy things and smashes goblins at the behest of the townsfolk. It's not going to fit everyone's vision of fantasy, but I'd argue that this sort of thing is more essential to OD&D than people today realize.

There are a lot of ways to run with this one, and I think it shows a certain myopia of fantasy that this concept died out over time. It's worth thinking about what it can do for your games.
Posted by Wayne R. at 10:21 PM