Cryptid Wednesday is back with a horror from France. 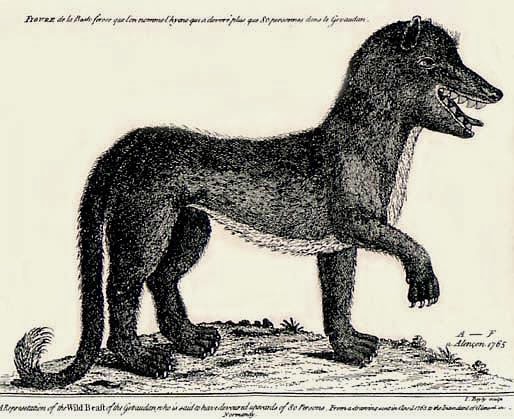 The ferocious beast of Gevaudan is a large creature, resembling a wolf in features but the size of a cow. Its fur is blood red with streaks of black, and its hide is mottled and mangy when seen. This is a vicious predator, showing a particular taste for humans as well as large livestock. Its odor is so noxious as to be unbearable. NPCs must make a saving throw or morale check (referee's option) to continue fighting it in melee.

In combat the Gevaudan beast will often strike directly for the throat of an opponent with its razor-sharp teeth. It can also use its heavy tail to render an opponent prone. A successful hit removes the next turn's action.

It is not clear if the Gevaudan beast is unique, but it is hoped to be. The horror will generally prowl near isolated farming villages.
Posted by Wayne R. at 9:21 AM