This vicious primate originated in Appalachia but is prime for your fantasy realm. 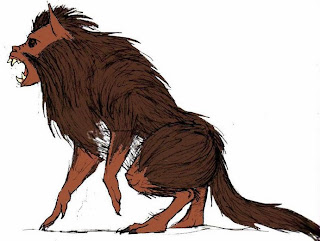 Devil Monkeys are a form of primates ranging from 3' to 4' in height, covered in shaggy fur and with long, bushy tails. They are extremely fleet of foot and can leap up to their full 18' movement range in any direction. In combat, they rely upon their vicious sharp claws, though they will sometimes bite. If it makes two successful claw attacks in a round, instead of dealing damage, the Devil Monkey may try to rend armor off of a victim. This takes 2 rounds and the victim may make a saving throw each round to break free of the monkey's grip.

These monkeys live in small troops, generally of 10-30 individuals. A large troop may have a leader, who has AC 6 [13] and 4 HD (CL 4/120). Their typical habitat is in the forests of temperate mountains, and Devil Monkeys have a particular hatred of dogs. Their primitive language may be comprehended using a Speak With Animals spell.

In the mountains where they live, Devil Monkeys are spoken of in hushed tones. They have been known to rip the roofs of covered wagons off to attack the humans inside.
Posted by Wayne R. at 9:39 AM