A Different Approach to Setting Design 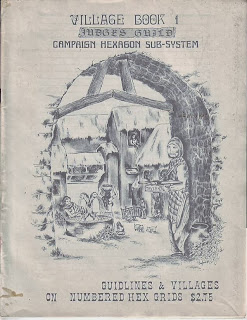 The biggest thing I learned when I did the OD&D setting series of posts earlier this year is that more can be implied about an RPG setting in a well-designed set of tables than from ten times as many pages of detail. More importantly, setting tables are immediately useful in a way that detailed books aren't.

In practice, if you have a relatively civilized pseudo-medieval sandbox, you will need to generate more than one small settlement. Rather than detailing out dozens of such areas, I think it's a valid approach to provide a set of tables and charts to randomly generate one on the fly. This obviously has to be a fairly quick procedure, but it's been done - in the Village Book 1 and 2, Castle Book 1 and 2, Temple Book 1 and Islands Book 1 from Judges Guild.

While there's a lot of love for the bare sketch of the Wilderlands setting, I think these six books imply an approach that I think is really worthwhile: a series of charts that help you put together details about a location quickly. The Wilderlands setting has interesting implied variations in civilization levels, and I think things like this could really be exploited to define a setting.

Setting should be something you don't see, like the air we breathe. Unless a game session is really saturated in details drawn from sourcebooks, the majority of the time the characters are just in "the world," and I've run a number of fine games with barely a shred of setting detail. The challenge of bringing setting to life is to use it in incidental ways - for instance, artwork and treasure might be recognizably from a particular era. "The statue depicts a general from the expansion of the First Empire" or "the brooch looks like it's from one of the Athean League states" are ways to provide impression of a rich setting without going and actually detailing it all out.

I really prefer the kind of setting where players can be slowly drawn into the details, possibly as outsiders. This is the traditional approach to Tékumel, but it's also very doable in a D&D world where the PCs are, almost by assumption, outsiders. This trope is very heavily backed up in the source literature: Conan is foreign to most of the countries he visits; Fafhrd and the Gray Mouser are not natives of Lankhmar, Bilbo and Frodo both go abroad from the Shire, Elric is a stranger to the Young Kingdoms - it goes on and on.

For a referee, then, a series of tables and charts and lists replete with little bits of setting flavor can easily add up to much more than the sum of their parts. They make it easy for a sandbox environment to be constructed on the fly that is nonetheless completely appropriate for the world that it is set in. They also have the advantage that the setting detail thus provided is entirely encountered in play; the referee only needs a sketch of the history and these fragments of setting detail to weave a richer picture at the gaming table.

Of course, this is different both from the traditional setting books and the current trend which is to provide Wilderlands-style hexcrawls. I think that it would pair best with a minimalist setting more akin to the original Greyhawk rather than the hexcrawl approach the Wilderlands used, but I'd be interested to see it with either style of setting.
Posted by Wayne R. at 9:32 AM