I wound up so busy last Wednesday that I missed out on giving you this entry in my series for Swords & Wizardry, which I had actually found the week before. I think he's good for the day before Halloween, though. 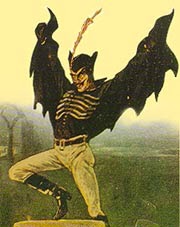 It is not clear whether the well-known Spring-Heeled Jack is a singular being or one of a variety of devils. In either case, it is a menace that dwells in towns and cities rather than the far-flung areas of the world. At first glance, bearing a cloak and hat, he is easily mistaken for a gentleman; but upon closer inspection his glowing red eyes and vicious claws distinguish him; reports of horns may or may not be accurate. Spring-Heeled Jack is capable of outleaping humans, hence his name; on foot he is no faster but he may close short distances in a series of quick leaps.

When he attacks, Jack is known for his blue-white fire breath. A gout of this breath will do 1d6 damage; if Jack breathes into the face of an opponent, they must make a saving throw (vs. poison) or be blinded for 1d6 turns. After he uses this fire he must wait 1d4 rounds before using it again.

Spring-Heeled Jack lives near settlements and has a habit of attacking lone travelers.
Posted by Wayne R. at 8:34 PM