This week's cryptid is an urban legend inspired by that feeling someone is following you. 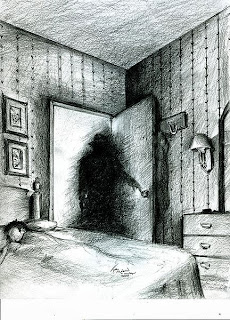 Shadow people are incorporeal beings that resemble typical shadows thrown by light, but are not themselves composed of shadow. They are physically distinguished by their glowing eyes. Most (75%) of encounters with shadow people are fleeting; they are seen for only a few moments before flitting away. They are not social and have no language, although some shadow people may make an eerie high-pitched noise.

When a shadow person does take an interest in a human, it is generally when it is twilight or later and usually when the human is alone. Solitary travelers and characters standing watch at night are particularly susceptible. If a character meets the eyes of a shadow person, they must make a saving throw or be paralyzed for 2d6 rounds. If the prey of a shadow person is thus immobilized, subsequent saving throws are made at -2 to the roll. After this, the shadow person will attempt to strangle the human; each round, the character must make a saving throw or take 1d6 damage. (No attack roll is made.) Magic-users and clerics may not cast spells while being strangled. A character who has taken damage this way will have the skin near their neck turned white until a Remove Curse spell is cast.

A shadow person's immaterial nature means it cannot be harmed by non-magical means. Magic weapons and spells do it full damage. Likewise, it may pass beyond any mundane boundaries (walls, doors etc) but is stopped by magical barriers, including Protection from Evil spells. It can be turned as a Wight, but is never destroyed by turning.

If killed, a shadow person leaves behind no remains.
Posted by Wayne R. at 8:41 AM