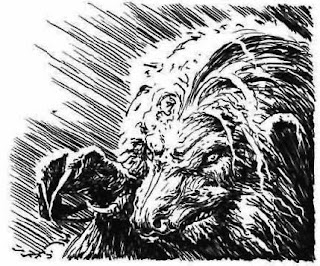 They stood only half erect, and their shaggy heads were about his thighs and hips, snarling and snapping like dogs; and they clawed him with hook-shaped nails that caught and held in the links of his armor.
- Clark Ashton Smith, "The Seven Geases"

I've been under the influence for a while now of Clark Ashton Smith's writing, and have grown particularly fond of his material on Hyperborea. I want to mine some of his work for D&D purposes, and there hardly seems any candidate more suitable than the Voormis, featured in "The Seven Geases." (Indeed, the story features a plethora of weird creatures, some of which make their way into the venerable Cthulhu Mythos.)

Voormis are slavering, shaggy-furred humanoids, who the arrogant Ralibar Vooz hunts for pelts. Smith describes them as "possessed of quasi-human cunning," using stones as missile weapons, but heavily implies that their "vile feeding-habits" include anthropophagy. Once Ralibar Vooz closes on them and starts pummeling them to death with his fists, they attack with tooth and claw rather than having weapons of their own. Perhaps most important to their use in D&D, the Voormis are frequently a subterranean race.

Smith has Ralibar Vooz take on a skeptical cast to the heritage of the Voormis, who are supposed to have been descended from the toad-like god Tsathoggua (who we see as a recurring theme in Smith's Hyperborean work). It is the kind of irony that CAS used heavily that this skeptic will soon be under the compulsion of several magic Geases and encounter all variety of gods and monsters in the underworld of Voormithadreth.

The most terrible Voormis in CAS's stories is Knygathin Zhaum, the antagonist of "The Testament of Athammaus," who causes the abandonment of Commoriom (and may well be the anthropophagic creature encountered in "The Tale of Satampra Zeiros"). In "Athammaus," the Voormis are described closer to degenerate humans than pure beasts, and Knygathin Zhaum is an almost invulnerable creature descended from Tsathoggua with the uncanny ability to reform after his head is repeatedly chopped off.

"Athammaus" also tells us that the Voormis did speak, using the "Eiglophian dialect" for which translators are needed in Commoriom. It also gives us a pattern of raiding, and the knowledge that it was relatively uncommon for them to be too aggressive with it. They are further anthropomorphized by Lin Carter in a short story called "The Scroll of Morloc," a tale assembled posthumously from CAS's notes and found in an old DAW paperback called Lost Worlds or in Chaosium's The Book of Eibon. (The current Wikipedia entry for Voormis focuses heavily on this story.)

The Voormis are an excellent "weird" answer to D&D's standard humanoids, both in role and flavor. I think their savagery but slightly more human edge gives them a weight where fighting them feels significantly different from the classic human / orc antagonism. I also think the ambiguity can be very useful to a referee; they can be as human-like as in "Athammaus" and "Morloc" or as bestial as the specimens in "Geases."

As far as stats, I would say they could safely vary from those usually given for orcs to gnolls; i.e., from 1 to 2 hit dice, and with an armor class between 5 and 7. Damage will differ based on specific system, but I would think either one attack of 1d6 or two of 1d3 each is appropriate. Morale would get a bonus when defending their homes.

So that is the Voormis; I think they're excellent adversaries, and can fill a classic D&D niche while helping to set a weird fantasy tone. I'm going to spend a few more posts on the creatures of "The Seven Geases," which is richest in terrors and wonders.
Posted by Wayne R. at 8:46 PM