Mud and Gas: Taking Inspiration from World War I 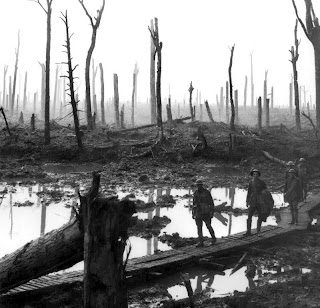 Far more treacherous than the visible surface defences with which we were familiar, such as barbed wire; deep devouring mud spread deadly traps in all directions. We splashed and slithered, and dragged our feet from the pull of an invisible enemy determined to suck us into its depths. Every few steps someone would slide and stumble and, weighed down by rifle and equipment, rapidly sink into the squelching mess. Those nearest grabbed his arms, struggled against being themselves engulfed and, if humanly possible, dragged him out. When helpers floundered in as well and doubled the task, it became hopeless. All the straining efforts failed and the swamp swallowed its screaming victims, and we had to be ordered to plod on dejectedly and fight this relentless enemy as stubbornly as we did those we could see.

Private Norman Cliff, 1st Grenadier Guards, To Hell and Back with the Guards, quoted in Peter Hart, The Great War: A Combat History of the First World War.

Dan Carlin furnished this reference in his fine podcast, Hardcore History, talking about World War I. And it strikes me to the bone; in the last six months or so I've developed a strong interest in the first World War and its attendant horrors, in no small part because it was so bloody and total a war, but unlike World War II, most of the atrocity was on the battlefields and not being perpetrated upon civilians.

The Third Battle of Ypres, also known as Passchendaele, stood out for one reason: the mud. Norman Cliff's description above does it far more justice than I can, but it was just pervasive and awful, and it was total. Soldiers had to live with it for months. It was a carrier of filth and disease and unlimited horror. People shat in it, people died in it, shells exploded in it, and you had to live with it. Wooden planks made easy targets for artillery and machine guns.

Mud is a hazard that is totally natural for RPGs. Outdoor locations are extremely liable to be mud-spattered in rainy seasons, while underground locations with an earthen floor could, under sufficient flooding, turn into a quagmire not unlike those in Passchendaele. Particularly nasty is when the characters are caught in a torrential downpour and the area around them changes from fields into a swamp. The mud in Ypres was compared to the consistency of cheesecake, and soldiers would slowly sink in like quicksand.

Armor is absolutely a disadvantage in these situations. A World War I soldier's kit is fairly comparable in weight to a fully loaded fighter wearing plate armor; if a character in plate falls into sufficiently deep mud, they need to be pulled out or they will drown. Chain is less heavy and probably gives a better chance to get out, although the armor might be ruined by caked-on mud holding water close to spots that will then be rusted out.

It also feels appropriate for various horrors to be lurking within the mud. Even relatively shallow mud, where characters aren't at risk of drowning, can be made hazardous this way. Permanent mud might be home to nasty dire versions of worms or crayfish or other things that creep through the muck. And I'm always a sucker for scenes like the one in Star Wars where the mynock drags Luke down in the trash compactor.

And mud is a great place to hide pretty much anything. It could be treasure that was once buried, or a door half-hidden by muck where opening it is a logistical challenge, or a floor now covered that holds a secret message. 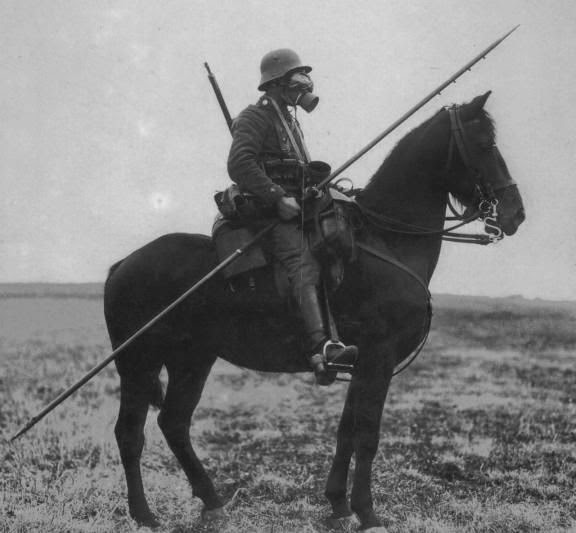 The first world war was also the first time that chemical warfare was widely used. The horror was brilliantly captured by Wilfred Owen in his well-known poem "Dulce et Decorum Est":

Gas! GAS! Quick, boys! — An ecstasy of fumbling,
Fitting the clumsy helmets just in time;
But someone still was yelling out and stumbling,
And flound'ring like a man in fire or lime ...
Dim, through the misty panes and thick green light,
As under a green sea, I saw him drowning.
In all my dreams, before my helpless sight,
He plunges at me, guttering, choking, drowning.

Mustard gas was another "gift" of the third Ypres, an irritant that first developed only red patches but would soon turn into excruciatingly painful blisters, often blinding the victim temporarily and then leaving him scarred for life, and often permanently blinded. In a certain sense, choking to death on phosgene or chlorine gas was fairly merciful.

Gas traps are a D&D commonality, but are often all-or-nothing affairs. The gas kills you, or puts you to sleep; there is none of the sheer horror that mustard gas put into British troops on the Ypres salient. Choking tear gas is often used on civilians in the modern world, but if your fantasy setting has sufficiently advanced alchemy, it could very well be a part of everyday life in the dungeon. Particularly striking would be opponents that have some sort of gas masks; the picture above of a German cavalry man wearing the Stahlhelm and gas mask as he carries a lance astride his horse is the kind of outlandish anachronism that the first world war created.

Of course, turnabout is fair play, and it is entirely possible for the PCs to use gas against the enemy. The Cloudkill spell is literally a gas attack, after all, but captured or invented chemical gas is also a potent weapon. At this point, of course, the biggest danger of chemical warfare must be remembered: one does not normally control the wind direction. In a dungeon this can be particularly nasty, as a lack of moving air could simply turn a gas bomb into a barrier that lingers for hours.

The first World War devastated a whole generation of men, some of whom (like Tolkien) turned out to be Appendix N authors. It dashed the dreams that science and modernity had only good things to offer, and created yearning for an idyllic past. At the same time, it formed landscapes on earth that would have previously only been thought of as godforsaken blasted planets, and blew away the pomp and glory of the 19th century in a storm of steel. When you need to create an atmosphere where humans are stretched to their breaking point, World War I is the logical place to turn.
Posted by Wayne R. at 5:04 PM