I was thinking recently about the new fifth edition of D&D, and how honestly I don't much care for its adventures so far. They are not strictly "railroads" in that players don't have to follow the plots to their conclusions, but they are a sequence of episodes that happen in a certain order, more or less no matter what the PCs do. And I don't like that model at all.

And the natural question is, what modules do I think are better models? 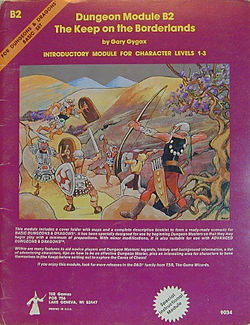 No reader of this blog should at all be surprised that I'll start with B2 Keep on the Borderlands. It's a natural choice, because it's the best module. I mean, there are other contenders, but certainly for low levels it's brilliant. The module can be attacked from almost any angle, but it works brilliantly. Hordes of kobolds? 1st level PCs possibly wandering into an encounter with an ogre? Death traps? Monsters right on top of each other? Gygax put it all in a sandbox and it all works.

B2 is brilliant because it presents a sandbox where every choice is possibly lethal. Simply fighting it out is rarely the right choice; PCs need to learn to explore, negotiate, trick and improvise. It's just big enough for the neophyte referee to not be overwhelmed, while giving the party truly free rein. There are several potential plots, or new ones can emerge through gameplay, but the module would work if you didn't pursue any of them, or added new plot lines in that were totally irrelevant to the existing rumor table.

Another great sandbox module is Better Than Any Man, the 2013 Free RPG Day module for Lamentations of the Flame Princess. BTAM is much more plotted than B2; in fact, the plot is iron-clad. The Swedish army is going to invade, and lots of people will die. But in context, this threat is nothing but a timer. Whereas in B2 the players can go back pretty freely to the Keep and recuperate, in BTAM they have an absolute need to finish the adventure in a certain time period or the sandbox goes away.

BTAM is dark, and disturbing, and has nasty stuff about sex. It also has great ideas, like an infinite repeating tower and several other interesting mini-dungeons. There are really only two that lead directly to the climax, but getting there is neither assumed nor a very good idea, to be honest. Instead it offers a number of very inventive locations to explore before the PCs should get out of Dodge Karlstadt while the getting is good. The timer of the looming Swedish invasion is a great way to encourage this without forcing it. 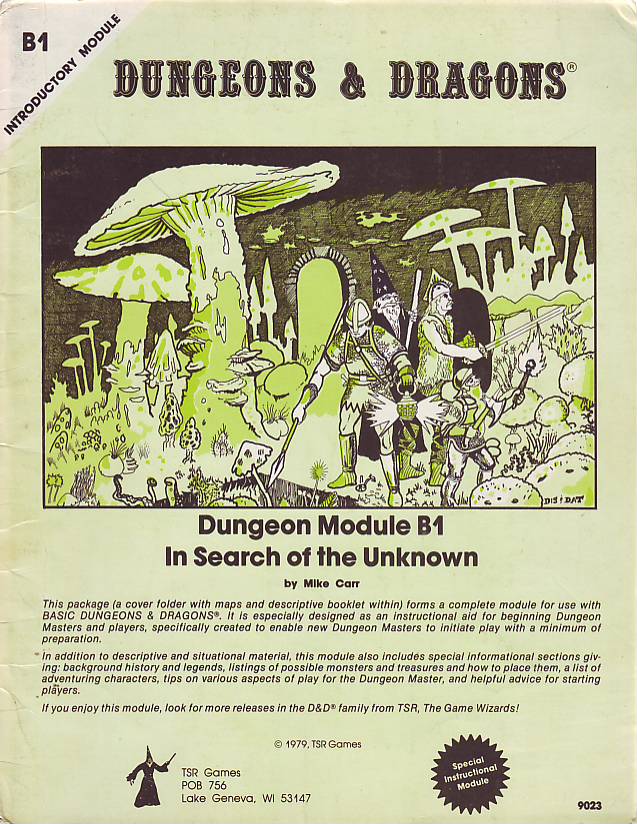 Then there's B1 In Search of the Unknown. It's Mike Carr's module that B2 was written to replace. B1 was solid, though: it provided the only extant module with a geomorphic level ("paper-thin" walls) and separated the rooms, the monsters and the treasure so that the referee had to place all of the enemies and loot logically. A good learning exercise, but it also greatly ramps up replayability. With certain exceptions like the room of pools, a referee who's run B1 multiple times can still be surprised when playing through it as a player.

The weakness of B1 is that the room descriptions are really long and overly mundane, and that it's not given over to randomness. 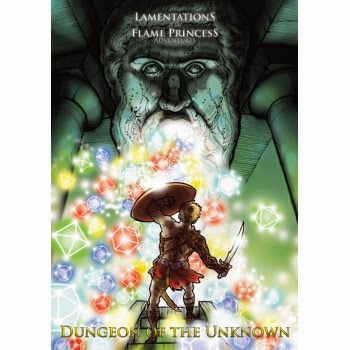 But Geoffrey McKinney fixed that with his Dungeon of the Unknown. I've spoken highly of this module before, and I'll do it again: DotU is a riff on B1 that provides new maps, and new monsters, including several monster generators. There are also weird encounter areas to be found. It's really quite stingy with treasure, using Geoffrey's idiosyncratic money types, but otherwise it's a great riff on what B1 did so well.

What's really interesting is that Dungeon of the Unknown is much more of a dungeon creation kit with a filled-in sketch in the back. I think that approach is something more modules should follow. 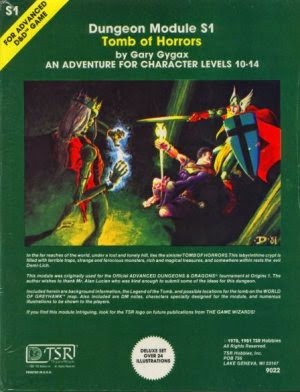 Then there's S1 Tomb of Horrors. It's the most infamous "tournament dungeon" and its actual tricks are pretty well known, especially the Great Green Devil Face. Despite its reputation, S1 does one thing very well: it gets PCs to do things that cause their own horrible deaths. You walk into the entrance? It collapses, you die. You pull the lever? You die. But it's always your fault.

What I love about Tomb of Horrors is how few monsters it has. It's one of the deadliest modules ever, but aside from a gargoyle and a demilich there just isn't much to fight. And that's brilliant. As I've said before, LotFP modules read as if James Raggi took this as an artistic manifesto.

Each of these is something I'd love to see more of in modules: the sandbox aspect of B2, the time pressure in BTAM, the modularity of B1, the kit format of DotU, and the non-monster threats of S1. Even those of us doing OSR modules could stand to go back through these and pick up a few of their ideas.
Posted by Wayne R. at 1:38 PM