Ancient historians and chroniclers were fascinated by stories about weird tribes. The two world-spanning histories that come down to us from antiquity, Herodotus's Histories and Pliny the Elder's Natural History, are replete with tales of bizarre tribes that were similar to humanity but not quite the same. These are all great material for weird and somewhat savage characters in roleplaying games. I've included some images of these types from the Nuremburg Chronicle. 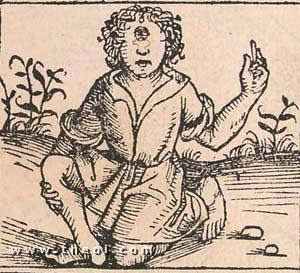 I've written before about the dog-headed cynocephali but they are hardly the only ancient tribe that was generally like humanity, but with a small twist or two. The Arimaspoi pictured to the left, for instance, are human-sized but have only one eye; one has to imagine that their skill with missiles is not significant. In Herodotus, they were the enemies of gold-hoarding gryphons, and lived outside of the idyllic Hypberborea. They make a great substitute for cavemen or similar tribes in mountains or caves. 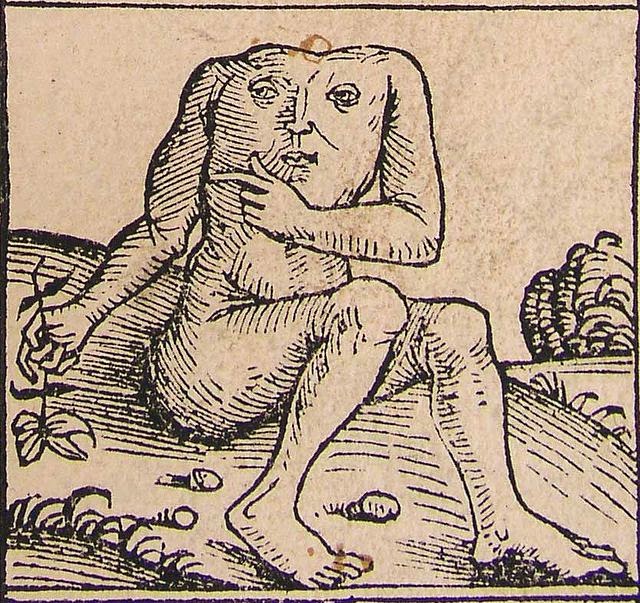 Blemmyes are a tad bit harder to understand. We know they didn't have heads — Herodotus called them akephaloi and located their eyes in their chests, while Pliny said they were in the shoulders. Our artist, following Pliny, gave them a nose and mouth in their chests, which may seem awkward but does make sense; the nose is closer to the lungs, and the mouth to the stomach, than in a human.

What is strange is whether or not the headless men are supposed to be intelligent; the name may literally mean "brainless," implying a frightful savage type. 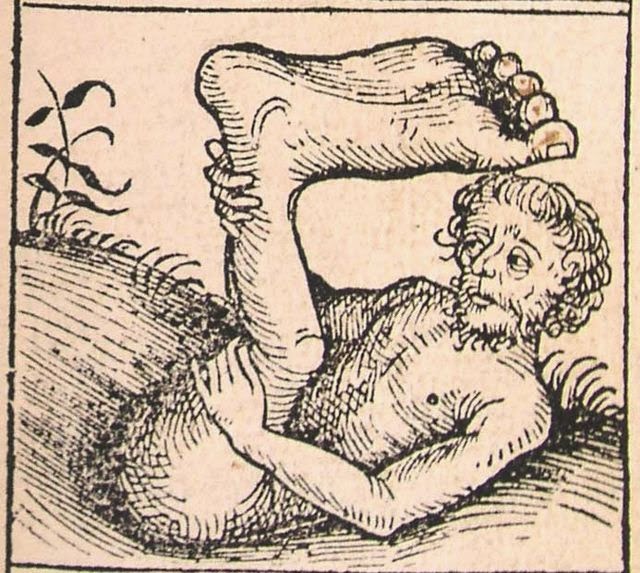 The Chronicler also drew a great picture of the sciapods — literally meaning "shadow foot," a mythic type described by the great comic playwright Aristophanes and our Pliny. They had a single gigantic foot that they would use to shade themselves. They leap surprisingly well for all that. Not much else is known of them, but there are reports of their existence from India and Ethiopia throughout the whole of history when traveler's tales and rumor were the only hints anyone had of the world beyond a very narrow boundary. 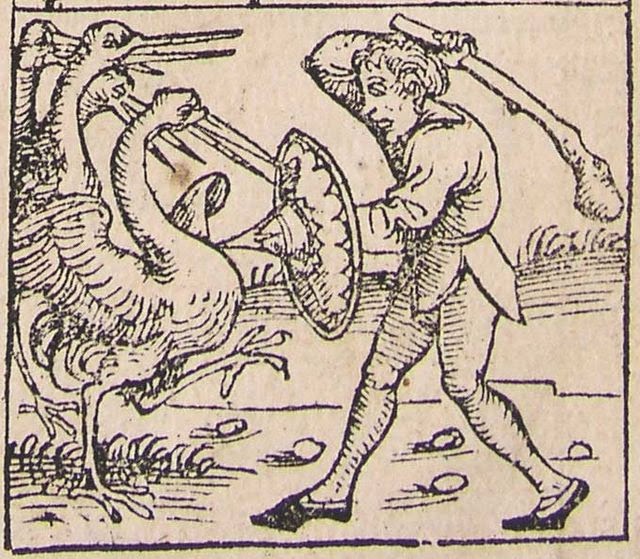 Then there are the diminutive pygmies, who were skilled with slings, rode on goats, and were engaged in continuous warfare with cranes. Yes, the birds. The cranes were supposed to have stones in their gullets that could be used to test for gold, a tremendously useful sort of thing. And I just have to love the Chronicle's picture of a well-dressed pygmy fighting birds with a big club and a proper buckler shield, a true study in contrasts. If you don't like Tolkienesque hobbits, a semi-savage race of bird-fighters might be a good substitute.

Each of these tribes, and several other types (troglodytae who went from cave-dwelling humans to inhuman monsters, myrmidons who were supposed to have sprung from ants, amazons and others) were always off in the furthest known stretches of land - north of the barbarian tribes you knew in Europe, south of Ethiopia or east of India. They are probably based on innuendo, rumor and ignorance, and grew in the imaginations of travelers. 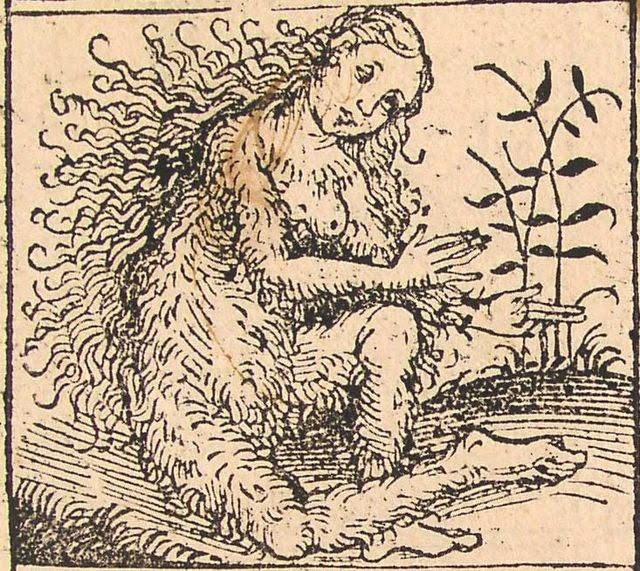 I like these tribes because they can fill a lot of different roles in a game, much like humans, but give it a feel that is a bit more fantastical than your vanilla people. The Nuremberg Chronicle's art hints at the critical ambiguity where you just aren't sure which side a people stands on. The cynocephali and arimaspoi are wearing robes that might imply civilization, while the naked hair-covered woman (a member of the tribe known as the gorgades) or the blemmyes speak of savagery through and through. You just don't get that with the cursus honorum of humanoids; goblins and orcs are for killing, and not much more.

Once expectations have been upset, of course, the door is also open for NPC members of these tribes to advance in various classes and levels. A one-eyed sorcerer or a fierce headless warrior can be a fascinating foe or ally — obviously depending on circumstances and alignment. Some can also have various types of shamans, witch-doctors and the like, as tribal types are inclined to.

You can see all of the Nuremburg Chronicle's odd people at Wikimedia Commons, and there is a terrific resource for Greco-Roman mythological tribes over at the Theoi Greek Mythology site. And drop me a line if you use these types in your game.
Posted by Wayne R. at 3:17 PM