So in my science fantasy world and associated megadungeon, I want to swap out the monster listing for OD&D. A few things will be classically Dungeons & Dragons, but even those will be somewhat modified. I think the general size of the monster list in Monsters & Treasure is good, and want to talk through it.

After Men, who deserve their own entry, we get the cursus honorum of humanoids: goblins, kobolds, orcs, hobgoblins, gnolls, ogres. I've always seen these as the bread and butter enemies at lower levels, making up megadungeon factions and holding various roles in the dungeons. 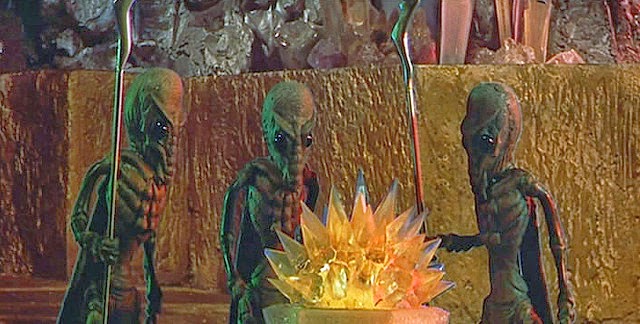 I mentioned in a previous post that Selenites would be replacing goblins, so it's worth taking a bit of a look at them. In The First Men on the Moon, Selenites are pretty easy to kill, being moon creatures; starting them off at 1-1 HD and assuming they're a little more solid will approximate that. One note is that I also want larger, more dominant Selenites to replace gobgoblins on down the line; this is in line with the hierarchical Selenite culture that Wells laid out in the novel. I particularly like this because it lets me vary hit dice and armor class within the same monster.

The main occupation of Selenites is herding mooncalves, which are absolutely massive creatures. I like that; having big mooncalf caverns gives a very definite ecology to the question of the dungeon. Mooncalves graze on underground fungi, Selenites eat fungi and mooncalves. 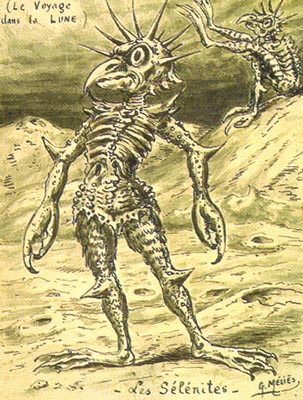 One of the big advantages is that Selenites are fundamentally underground creatures. Their civilization is in the underworld, and the ones in my dungeon will have taken control of some part of a complex in the early levels. I'd sort of like to play it where only people who've been down in the underworld have any idea that they even exist; it's not like they're the lizardmen, who the PCs would know about, but rather a totally alien creature as soon as they go down.

As subterranean entities, I think Selenites should still get the goblin's -1 to hit in bright light. OD&D also carries a note that goblins "attack dwarves on sight." This one suggests a possibility, that dwarves who came to this planet with the setting's humans have possibly had some run-ins with Selenites in the past and there is now a standing order to attack any dwarves they may run into. This would also be an interesting twist if dwarves spoke the Selenite language where they currently speak Goblin.

(This is one of the fun things about bouncing ideas off of OD&D - the dwarf idea was not in my plans but actually works out.)