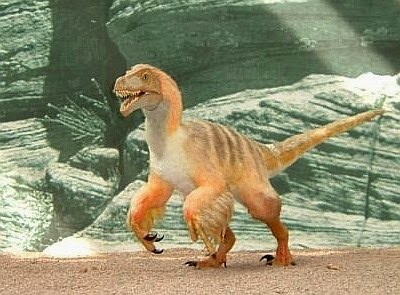 In addition to my B/X campaign, I've been working on some concepts for a combination of a world setting and a megadungeon. But it's a bit different from what I've been doing previously. I want to talk a bit about where I'm thinking of going in terms of world creation, theme and influences.

A big thing thematically that I want to achieve with this setting is to do a world that is, at the same time, both recognizable as Dungeons & Dragons, and isn't at all a generic fantasy setting. Hence the deinonychus above.

What I'd really like to get down is a science fantasy world that doesn't have a gonzo, crazy-go-nuts feel. I know that's an odd balance to hit when your goal is wizards and laser rifles, but I feel that it's a time-honored part of Dungeons & Dragons that should still be able to take itself with a modicum of seriousness. Part of that is doing things like dinosaurs but having them be scary rather than wacky. Again, hence deinonychus.

The basic assumption of the Dungeons & Dragons setting is that it's a pseudo-medieval world. I'm not going with that, although the PCs still look and act basically the same. The underlying idea is that the main human civilization are themselves literally aliens. The world that the PCs (well, their ancestors) come from is a high-magic world with all of the standard fantasy trimmings. They no longer live there. During the magical equivalent of a global thermonuclear war, the Second Empire opened a gate to another world. The first brave and hardy settlers had wizards helping them; much of their resources and knowledge were lost, but fragments remain. Now it is two centuries later, and the human realm (name TBD) has gone into a semblance of normal life.

So there are several sources of monsters. One is the other civilizations of the world that the humans came into; at this point the one they have the most contact with are lizardmen, who live in a vast swampy kingdom to the south of the human settlement. They have some weird technology, mostly a mix of found tech from previous civilizations – nothing orderly and modern, but enough that humans pose no fundamental threat to them.

As to the megadungeon itself, it's a multi-level dungeon that happens to be built near the ruined and long-since buried capital of an Atlantis style civilization, a mix of high technology and high magic. There are tribes of primitive blue-skinned humans living underground, the descendants of the last survivors of this world; they are savage and have no memory of their lost homeland, only a sort of religious worship of some of its artifacts.

I want to play a lot with megafauna in this setting, both dinosaurs and giant creatures. I'm particularly inspired by this description from Holmes's manuscript (reproduced on the Zenopus Archives):

Giant rats, spiders, scorpions and other horrors are naturals for dungeons. The Dungeon Master should adjust the monster's hit dice to the depth below the surface and assign a suitable armor class. These creatures fight ferociously, have special abilities, and there are many interesting possibilities.

I really love that bit about "have special abilities." Yes, you know what a fire beetle is in a standard D&D world, but the beetles in this world might be based on the bombardier beetle.

Future posts will talk more about this as I flesh out the world and solidify more of its aspects. But I'd be interested in reading what thoughts and ideas folks have for developing this kind of setting while keeping it feeling like a more or less logical world, not a zany mish-mash.
Posted by Wayne R. at 11:22 AM