I've re-assigned the old Cryptid Wednesday posts to a category called "Cryptid Corner," the new name of this feature. I've left the old names of the posts but the tags are all corrected. Today we go to the Balkans for a cryptid plant rather than a creature as such. 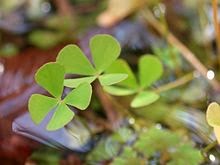 
In remote and distant fields grow an herb called raskovnik, or thief's clover. It grows in close proximity with other herbs, and an untrained eye could pass over a specimen a hundred times without ever espying it. The herb can be found with some difficulty by druids, yielding at best 1 quatrefoil per hour. Tortoises and snakes are quite capable of finding it, and will be able to direct a character to a clump of 1-6 quatrefoils per hour. This never reaches more than 10 quatrefoils found in a given field in a month.

When the stem of a raskovnik plant is placed in a lock for 1 turn, the lock will be opened (it is permanently broken). This applies to all non-magical locks, regardless of complexity. Inserting a raskovnik stem into a trapped lock will trigger the trap on a roll of 1-2 in 1d6. A Wizard Locked door can only be opened by a number of raskovnik quatrefoils equal to the level of the magic-user who cast the spell. Other magical locks are similarly effected.

A tea can be brewed from at least six raskovnik plants in eight ounces of water. This must be steeped for at least 4 hours to gain the desired effect, and the plants so brewed lose their lock-opening powers. The remaining tea is strongly concentrated and, if drunk, will grant the ability to detect the largest treasure within 120' of the imbiber for 2-12 turns.

Rodents have an insatiable appetite for raskovnik. Hedgehogs, giant rats and other rodent-like creatures within 60' of a raskovnik plant (living or cut) can smell it and will seek to devour it immediately, ignoring anything that comes between itself and the plant.
Posted by Wayne R. at 11:03 AM