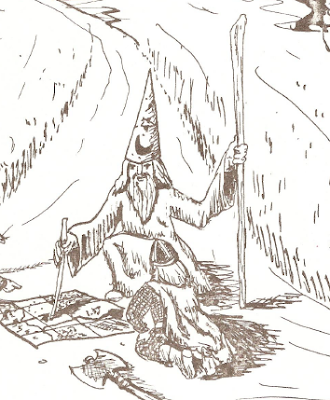 If you don't know the history of the document called, alternately, Beyond This Point Be Dragons and the Dalluhn Manuscript, the best thing to do is read Jon Peterson's analysis of it. This is ridiculously thorough, although it doesn't include the latest findings, a fairly complete playtest document that reflects pre-publication D&D.

So: I'm going to comment on this document, although I don't have the rights to share it. Despite the fact that I like the title "Beyond This Point Be Dragons," I'm going to call it Dalluhn after Keith Dalluhn, who uncovered the photocopied text in M.A.R. Barker's papers. In some cases, analyzing Dalluhn means I'm basically going to be talking about changes of unknown provenance. That's fine, because I'm interested in early D&D play and this is a document that preserves it in some sense, even if it's not directly from Dave or Gary's tables. And as always I'm mainly interested in making it relevant to games people are playing today, in 2017.

In Dalluhn, magic-users are said to:


dress in boots, tunics, and cloaks, usually in a special color of the individual (such as Brysbane the Blue) or the Guild or Fellowship they belong to (such as Fellowship of the White Hand)

Furthermore, their goals are described as follows:


The prime object of Magic-Users, depending on individual preference, is to either form or head their own Guild or Fellowship, or to go off somewhere to brood and study in a tower.

The implication is that there are both solitary and organized magic-users in the world, and that there are multiple groups of the latter. This idea strikes me as remniscent of The Lord of the Rings, where Gandalf speaks of "my order" - which I don't think is a coincidence, since the Dalluhn sample character is not Xylarthen but Mythrandir - a misspelling of Mithrandir, the elvish name of Gandalf. It does have other Appendix N bona fides, though, such as the guild of evil enchanters in The Mathematics of Magic.

In a game, there is one obvious - perhaps even overwhelming - reason why a PC magic-user would want to be part of a guild structure: the ability to learn new spells from other members of the guild. It's a benefit for the player but also a relief for the referee, who no longer has to shoehorn scrolls and spellbooks into their adventures. That's not to say these can't be part of the treasure, but it stops being obligatory when there's a good external source of spells.

But the referee shouldn't allow a whole guild of wizards to be a modern, business-like arrangement, when it is a rich and varied opportunity for worldbuilding. In many respects the medieval guilds were more like modern secret societies, to the extent that many such societies, like the Freemasons, derived from guilds. It seems almost like a moral imperative that such guilds must have arcane initiations, rituals, and obligations for their members. It could even be a metaphysical requirement for them to take on all kinds of esoteric symbols and rites in order to pass on their knowledge.

And of course those obligations are a rich vein of adventure seeds. Before your wizard can learn the Invisibility spell, he needs to advance to the 9th degree, and that requires you to get a fresh cockatrice egg for the guild's stores. They're needed in the production of certain potions, you'll learn about them when you reach the 17th degree. You'll need to provide the guild with a new spell before you can reach the 27th degree and be allowed to learn the secrets of making magical items. The list is only as limited as the magic-user's level.

The guild can do a lot of things outside of simply bossing a PC around. They can be hotbeds of rivalry, or places where the characters make deep connections. There can be onerous requirements - this is a good reason to forbid magic-users from using certain weapons or armor. There may be other restrictions on diet, or requirements of always using a certain talisman. It may also be forbidden to use magic toward certain ends, with the penalty for transgression becoming quite severe in some cases. And of course, the guild's knowledge must always be secret.
.
If you want to add a more Appendix N twist to magic, a guild suggests a couple of avenues to pursue. For instance, the guild's lore may contain the true name of a particular demon who can be commanded, although the magic-user must try not to alienate the fiend - allowing an avenue to play with some tropes from de Camp's The Fallible Fiend. Or if you take ideas from DCC or 5e, they may have a relationship with a particular patron, and initiation in a certain degree may require the DCC spell Patron Bond or its equivalent.

When a PC magic-user establishes their own guild or fellowship, it's natural that other PCs will be a part of it. This is a particularly useful concept if the players are in an open table type of setting, and one player might share a spell with another - although as before, there should always be costs. If the guild is too generous, NPC magic-users might come in and cause issues - or act as rivals to shut it down. Any time a PC leads an organization, rival groups should be a part of the calculus.

Above all, I think the magic-user guild should be a clarion call to "keep magic weird." It offers the referee an opportunity to play up the esoteric nature of spellcasting, and provides a viable "endgame" for magic-user PCs in an open table.
Posted by Wayne R. at 10:44 AM