A Thief in the Dying Earth 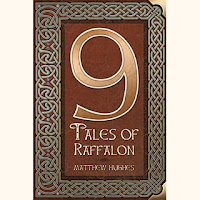 The description of Matthew Hughes's latest short story collection, 9 Tales of Raffalon, is simply: "A Thief in the Dying Earth." Hughes is a fantasy writer who has been working in the space of the "Dying Earth" subgenre, typified by authors such as Jack Vance and Gene Wolfe. While Hughes's prose will not stand up to the stiff test of those authors, Raffalon is a creation that should bring a smile to the face of any Vance fan. He is a thief in the vein of Cugel the Clever, continually finding himself (usually with good cause) in the crosshairs of strange wizards and mortal enemies while being rakish and clever about it.

I first found Raffalon by browsing for The Magazine of Fantasy and Science Fiction, which I pick up periodically because I enjoy short stories and enjoy the fact that there's still a magazine publishing fantasy stories. I found "The Prisoner of Pandarius" and immediately felt at home with Hughes's world.

The worldbuilding in Hughes is solid. He has created a very peculiar universe, full of interesting and arcane guilds with various restrictions and symbols, and characters who've learned to live right at their edges. The period Raffalon spends in "The Vindicator" working the offices of the Ancient and Honorable Guild of Purloiners and Purveyors is, particularly, a fun way to set up that story. If you want to have thieves' guilds or similar institutions in your game, this is a must-read.

Another area where Hughes shines through is in his description of magic effects. Magic is strange, and visceral, and really quite wondrous. The effect in "Wearaway and Flambeau" is a particularly fun one, as is the experience when Raffalon actually casts a bit of a spell in "Stones and Glass." It's described in a way that really takes the reader through the process and helps you realize why all the spellcasters in Hughes's stories tend to be arrogant and bizarre sorts.

This collection is an assortment of picaresque tales, and while there are recurring figures they don't form much by way of a grand narrative. Raffalon started at the end, in "The Inn of the Seven Blessings" written for the anthology Rogues, and he is pretty much an iconic thief from the earliest of his tales. (Hughes's new character, Baldemar, has more of an arc to his stories.) Raffalon is a bit more likable than Cugel the Clever, who is openly his inspiration, which is to his credit, though he's not as sharp-witted.

Among "Vancian" authors, Hughes does not mimic the decadent prose of The Dying Earth. His writing works fairly well for the stories but isn't just enjoyable on its pure merits. A short sample from "Wearaway and Flambeau":


A thief's credo is to avoid capture and punishment by any means necessary. But Raffalon had added a corollary to that code: when all is lost, at least go out with a bold face. He now set his features into as intrepid an arrangement as he could manage, and turned his gaze upward. He found himself staring, as expected yet hoped against, into the uncompromising visage of Hurdevant the Stringent.

That's about the level of writing you'll get; I find it fine, and it reads quickly, but I wouldn't want to disappoint someone looking for a Vance or, say, a Michael Shea in this anthology.

I enjoy these stories because they are what is advertised on the tin: short stories about a thief in the Dying Earth. It's just nice that after all these years of plumbing brick-length fantasy novels and finding them shallow, somebody is out there still embracing good old picaresque fantasy in the short story form.

9 Tales of Raffalon is available from Amazon or directly from Matt Hughes. It's recommended to anyone interested in dying earth fantasy, thieves and thieves' guilds, or just having some fresh short stories to pick your way through.
Posted by Wayne R. at 1:02 PM