Hacking Through the Tunnels 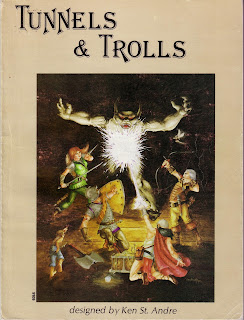 You can now buy the fifth edition of Tunnels & Trolls on DriveThruRPG from Flying Buffalo. T&T is Ken St. Andre's response to original D&D, and in many ways represents a complete and immediate reaction to things that people didn't like about D&D.

Oakes Spalding is doing an in-depth review of the original edition of T&T over at Save Versus All Wands (nb: the blog header contains the topless amazon picture from OD&D). It's quite in depth, and goes to lengths that I'm not going to bother with. But it's a good review, both in terms of discussing how T&T works, and in comparing and contrasting it with OD&D. In fact, the review is credited as an inspiration for releasing 5e in the T&T blog announcing that the 5th edition is available for download.

The first five editions of Tunnels & Trolls came out in rapid succession, and basically were minor expansions of the original. 5e was the pinnacle of this development and sat as the edition of T&T supported by Flying Buffalo for decades; it's the one I've used for all my solo T&T gaming. It was also the version that was properly typeset and looks nice. Deluxe T&T (a Kickstarter that took years to come out) is a nice book if you want to kill a bug, but it's just not necessary. It changes and adds things and tries to fix a game that just worked.

T&T came out of the idea that OD&D, as presented, is an overly complicated game. Ken St. Andre chose to simplify from it, getting rid of things like Vancian magic, armor class as to-hit numbers, and twenty-sided dice. It's an ironic thought given that OD&D is often praised for its simplicity and flexibility relative to AD&D and later editions of the D&D game. But when the games are compared, it becomes clear that Tunnels & Trolls is simpler, but by no means simplistic. In many ways it's a rich game.

For instance, Tunnels & Trolls combat reduces monsters down to a single number, a Monster Rating (MR). (There is a more in-depth method presented making them similar to characters.) But what makes this interesting is that a monster's MR is not necessarily the same from encounter to encounter. You could decide that a particular orc is scrawny with a measly 30 MR, or a tough guy with 60 MR or better. More importantly this method makes it dead simple to improvise monsters, or change them to suit your needs.

Combat is likewise simple without being simplistic. Because it winds up with a death spiral as monster dice and adds (the number added to the die roll) decrease, or player adds fall away with damage, it makes avoiding combat or running away an important point. Armor is also much more significant, as it reduces damage when you're on the losing side. So if you prefer ablative armor, here's your game. Also, there's a reason to wear a helmet, which reduces damage taken; no D&D edition has ever made it so simple.

I also can't pass without mentioning saving rolls (SRs). Originally all SRs were based on the Luck stat, which can be increased (all stats can). You roll 2d6 against a target number based on the level of the Saving Roll; so a first level Luck SR is 2d6 vs 20-Luck. But for characters with low Luck scores, the rule is "doubles add and roll over." This is weird mathematically but creates a decent shot for anyone to make a SR even when it seems impossible. 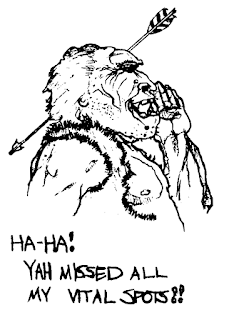 Liz Danforth's art sets the tone for T&T. It is well executed, has a sense of humor about itself, and is deeply DIY. The sense that RPGs are not all VRY SRS BSNS was snuffed out of gaming by the early 1980s and has never really made a full comeback; certainly every version of D&D after the AD&D books got the gold spine covers is stripped clean of any sense that this may be a piss take.

That doesn't mean that it can't be played quite seriously; the adventures are definitely dangerous, and the system will work for an intense game, as Ron Edwards has noted. But there is even playfulness in the spell list and entries like "Take That You Fiend" or "Curses Foiled." (A few are unfortunate, like "Yassa Massa" which should be renamed.) No game introduced by Grimtooth can be all glum.

T&T also has a really interesting system for getting Adventure Points (APs). Characters get APs for going out on an adventure, based on dungeon level; they get the Monster Rating of any monsters slain as APs; they get points for every Saving Roll attempted (successful or not), and for casting spells. It explicitly avoids GP-for-XP, but makes up for it by explicitly rewarding characters going out and getting into the dungeons.

Advancement is a way to increase ability scores. That's pretty much what it does.So when you reach 2nd level, you can choose to add 2x the level number to Luck - that's 4 Luck points. Ability scores are not capped at 18, so this could bring a PC as high as 22 Luck (although it's not likely). That translates straight into Personal Adds. Other stats help with wielding weapons (ST and DEX), casting spells (IQ), taking damage (CON), and relating with NPCs (CHR). This works out because of the importance stats have in the game.

T&T is, above all, a very open game. It embraces a strong referee with a creative vision, although ironically the game is very well known for solo modules. (You'll want to start with Buffalo Castle.) If nothing else, giving a run through a few solos will change how you think about old school gaming, and it's one of the few experiences that any RPG gamer can have "out of the box" even in 2017.