The Tao of the Empty Room 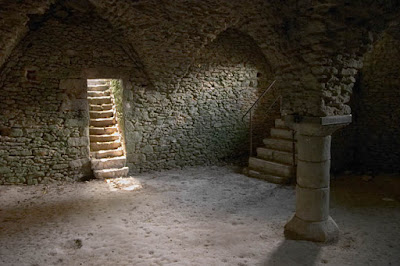 The dungeon stocking table in OD&D results in 5 out of every 9 rooms being empty. (We're excluding rooms stocked by the referee.) These rooms have no monsters and no treasure.

I've written before that empty rooms are critical for spacing and timing in OD&D. The question that we have to ask, though, is how empty they should be.

Of course, some of these rooms will be trap rooms. Those are good, noble, and deserve their own separate post. I will make one side observation about traps here: pit traps in OD&D only trigger on 1 or 2 in 1d6. A pit trap that has PCs have passed over without it opening can be even more dangerous than one that is fresh, because the PCs think that nothing is there. But here we are mostly talking about the empty ones.

Sometimes rooms should be empty of anything at all. This is a useful reminder to the referee that the dungeon is a mythic underworld. Not every square inch of the underground needs a rationale. In logistical terms this also allows the referee to use rooms that only appear to be empty. When they turn out to contain traps or secret treasure, the reward is all the better.

James Maliszewski wrote about the mystique of the empty room. Every turn in a dungeon is a use of resources runs the a risk of wandering monsters. Timekeeping being important, such empty rooms become tense situations.

But not all empty rooms have to be devoid of everything. When you have members of a dungeon faction in an area, nearby empty rooms can create a more "lived-in" feeling. This could mean, for instance, that there is a second area where denizens spend their time. Monsters might even split their time between the area that the map key indicates for them and an ostensibly "emtpy" room. This also makes it possible for PCs finding the empty room first to get a clue of what is up ahead.

There could also be structural reasons for the room to be empty. A room noted as empty on the key might, for instance, have a large pool of standing water. Perhaps it is unsound, with cracks in walls or floor. Anyone who has been through a home inspection can think of many reasons a room for a room to want for occupants. Mold, mildew, even just something with an unbearable stench makes for a good excuse.

If your dungeon has tinkering monsters, the room could house a partial or failed construction project. A bunch of bricks might have been removed from the wall or ceiling. There may be the discarded makings of a fortification. This is a good excuse to give fodder for clever PCs to make attacks on monsters.

Another interesting trick is to use a room that is only mostly empty. Such a room might have architectural interest that provides hints to the history and nature of the dungeon. It can also have one of several physical features typical of underground areas. A fun one is to have a spot where it is possible to see or hear what is happening in an adjacent room. Perhaps there is a loose stone, a pipe, or a spot where the acoustics just work out.

Remnants make a great feature of the mostly empty room. A discarded wine skin or broken weapon implies that the PCs aren't the only adventurers who have been in the dungeon. Broken or torn and generally useless items are classic red herrings. They also present opportunities for the referee to place vermin and insects that don't merit a proper monster entry. Even non-poisonous insects can make for a great creepy underground experience. (Such vermin can later appear in monsters' stew-pots as a fun callback.)

A fun variation is to feature graffiti on the walls. Scratched or painted writing and pictures are another excellent source of hints. For an extra twist, consider having graffiti on the ceiling to reward players who think of checking above their PCs' heads.

There is also the opportunity here to make the dungeon get weirder the deeper the PCs go in it. If the first few levels are a bit more quotidian, you can change things up with empty rooms that seem more Stygian and have stranger features. The random noise table from the 1e DMG is a great resource for unexplainable sounds. Likewise, air currents deeper underground and shifts in temperature or humidity become ominous.

One of the reasons I like the empty and mostly empty rooms so much is that they avoid the "fantasy IKEA" effect. Excessive rooms full of stored stuff takes away the mystique from the dungeon. I also don't like it because generally I prefer when the dungeon is well scavenged. A room that was once a dining room shouldn't have a table in good shape; it should either have rubble or nothing in it.

A critical fact about empty rooms is that, in a living dungeon, they don't need to stay empty forever. Putting monsters in a room that players have already explored and found empty is the best payoff for having empty rooms. A group of monsters that wasn't finished off the first time might change addresses, or a new monster might move in. Given the 5 of 9 ratio, there should be more rooms available than taken, so the dungeon can make a complete change through play. This is one of the factors that keeps drawing me to the megadungeon idea.

The title of this post implies its central idea: the Tao of empty rooms matters. Letting a dungeon room stay empty can be more rewarding than you'd think.
Posted by Wayne R. at 4:08 PM