Learning from Nature: the Mechanics of Traps 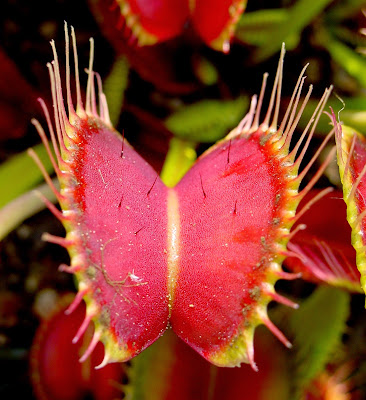 A fascinating article in the Atlantic describes the mechanism of the Venus flytrap as scientists have studied it. It's a great description of the Venus flytrap's mechanics, which through evolution shows how an unthinking plant can hijack the instinctive survival response of an animal. Its process is instructive in how we can think about trap design.

First, the trap is appealing. A fly comes along because it smells something sweet. By making itself attractive the flytrap uses the appearance of other plants around it as an offensive weapon. Since the fly can't tell immediately that it's a trap, it comes in to inspect. Only then is it doomed. This is a good principle for elaborate traps in D&D. PCs are always looking for treasure. Appearing to present a treasure is a good way to present a trap, but not the ideal way.

D&D players aren't, no matter what some referees may tell you, as dumb as flies. A trap that's simply too obvious, such as a chest of shimmering jewels and gold coins unguarded in the middle of a room, will be regarded with the utmost paranoia. It's obviously a trap. A really great baited trap is one that looks like hidden treasure. It's hidden in a secret compartment or panel that can be found by careful PCs. Such a subversion is cruel, but sometimes the best way to spring a trap on players is to make them work for it.

Second, the trap has error-checking. It only closes when two of its cilia are brushed. This is a wonderful principle for mechanical traps: the trap is not triggered on the first pass. The primary reason for this is to avoid false alarms, as described in the article. This is good and pragmatic. But with a D&D style trap, there is a further benefit where the party is drawn deeper into the trap before it springs. A simple pit or arrow trap will kill only one member of a party, but it is reasonable for trap designer to aim for multiple kills. And it may also be a way for monsters (or clever PCs) to avoid a trap by letting it reset after the first trigger.

There are two good ways to implement this principle with a D&D trap. One is to require a single trigger to be pressed more than once, such as a pressure plate that activates a two-step process. The first step cocks the arrow and the second fires it. The other is to have two separate triggers, one that starts the trap process and a second that finishes it. Either can work and both are nasty surprises.

Third, the trap imprisons without killing. This can be useful in a faction dungeon where the monsters might prefer to question a member of a rival group spying on their territory rather than killing them. The victims of such a trap become useful bait or can be traded in a prisoner exchange. This can lead to a tense period where the PCs have an opportunity to try to escape before the monsters who set the trap come to check it. Or the designer may have abandoned it and the trapped characters are stuck until a wandering monster comes along.

A trap that doesn't kill outright is extra fun if it affects only a single PC. The rest of the group simply sees the lead PC go missing and isn't sure exactly where they are, while the trapped character has to deal with their predicament on their own. It presents the immediate dilemma of how much effort to spend on saving the trapped character. And as noted about the factions above, such a PC may be a bargaining chip that stops the rest of the characters from barging in and killing a monster group.

Fourth and most brutal, the trap makes its victim kill itself. The fly's struggles against its captivity doom it. Standing still would be the best policy, but it goes against their instincts. This can be copied in straightforward ways, such as by having the character trapped so tight that they can't struggle to get out without impaling themselves on a spike, or puncturing a container of poison gas or acid. It could also be a question of physics, if the trap is suspended more than 10' above the ground. Even a simple quicksand type of trap, where struggling to extract yourself actually pulls you in further, does a great job with this principle.

But this can be used in more devious and subtle ways. Efforts to escape can let the players, who again are still smarter than flies, outthink themselves. Elements of the trap itself may be unstable or unsafe, or designed in a misleading way. What looks like it will open a door actually operates a hidden ballista, or opens a chamber above full of heavy rocks. You can go way too far in this direction and wind up in Grimtooth's Traps, but I think there's a lot of fun trap design short of that.

I love the concept of the Venus Flytrap. It's an elegant and simple life form, and does its work without even the simplistic thought patterns of the fly, but it does something very intricate and involved. Its principles can lend a lot to any trap in your dungeon, whether you pick one or all four.

Oh, and don't forget the simplest way to apply lessons from this article in your dungeon: giant Venus Flytraps.
Posted by Wayne R. at 2:53 PM