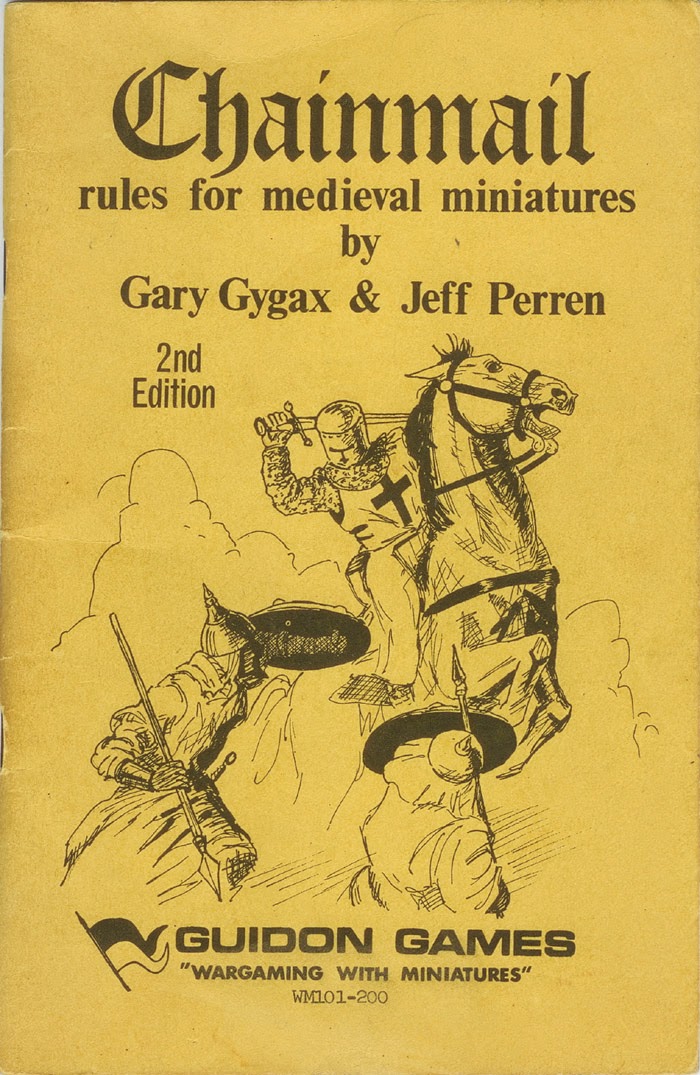 In an RPG.net thread about OD&D, Mike Mornard posted an observation about Chainmail morale as applied to a typical D&D scenario.

CHAINMAIL has "morale due to excess casualties," and it also assigns troop equivalents to manlike fantastic creatures (kobolds, goblins, etc.)

So, goblins attack as heavy foot and defend as light foot. For morale checks, then, I'd treat them as Light Foot.

So, twenty goblins rush at you. Your magic user (standing behind your dwarf for half cover) throws Sleep and drops seven of them.

Now, let's say they make it.

At the next casualty percentage... that is, for light foot, at the second 25% casualties... THEY AUTOMATICALLY ROUT.

Mike doesn't fully describe the mechanic as written. In Chainmail, each troop type checks morale at a certain threshold (25% for light foot, peasants or levies; 33 1/3% for heavy foot, elite, armored, Mongol, and medium horse; 50% for Swiss pikemen, heavy horse and all knights). That triggers a 2d6 roll. If it fails, they run; if it succeeds, they will fight to twice that percentage before they automatically rout.

So when the party is fighting a group of goblins, and kills 50%, the rest should scatter. This trigger went away in the B/X simplification. But it also applies to orcs, which fight as heavy foot, so orcs should check morale when losing 1/3 of their force, and always flee if they lose 2/3. Tougher foes will only flee if they lose at least 50% of their initial numbers.

This system maps particularly well to OD&D, and allows for a simplification. The percentages and minimum score on 2d6 to stay and fight can be grouped by hit dice.


The referee should set the morale check appropriately for any monsters, so I'd expect orcs to stand on 7+ but hobgoblins to fight on a roll of 6+ due to better morale. A group of 12 orcs will never keep fighting to the last orc; it will flee when only 2 remain. Meanwhile the 6 trolls on level 1 of Castle Greyhawk will check morale once when there are 3 left, but will never flee if they make their check.

In a pinch, these morale rules can be used for other effects as well. In Chainmail, a pike charge or cavalry charge causes a morale check or the unit falls back. While the requisite 10 pikemen can't go into formation in most dungeons, the basic idea works for enemies faced by, say, an elemental that a PC wizard has summoned.

This interpretation makes goblins and kobolds much less threatening, and generally does a lot toward making the lower levels of OD&D more survivable. It's unfortunate that neither the Chainmail chart nor a straightforward means of interpreting it have ever appeared in a D&D product, but I like this as a morale rule.
Posted by Wayne R. at 9:26 PM