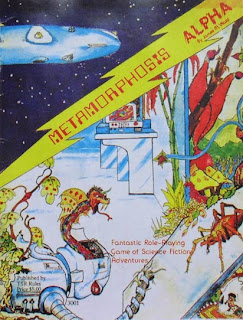 I have a bunch of pregenerated PCs available for Metamorphosis Alpha, plus the What You Know sheet for the Metamorphosis Alpha game I will be running this Saturday at Philly GamesCon. Starred powers in the mutant pregens come from The Mutation Manual, a sourcebook full of wonderful new mutations. The non-starred powers, plus all other information, comes from the core rulebook.

I've found that the "What You Know" sheet is pretty essential for running a pick-up version of game like Metamorphosis Alpha. It summarizes briefly some basic concepts that players need to know in order to play the game. The ideas come from reading source novels like Heinlein's Orphans of the Sky and Aldiss's Non-Stop / Starship, both of which establish their main characters' general ignorance of their world.

I'm still prepping the rest of the level I'm running, which will include a few charts for random encounters and detailing out some odds and ends. I may share some or all of it after I've run it, although at least something has to be held in reserve for when I run it again via Hangout. Which, TBH, is pretty likely. Metamorphosis Alpha is a really neat game, and one of the reasons I like it so much is that it doesn't require "campaign" style play to be rewarding.

Outside of this upcoming MA session, I'm running 5e D&D again, so the blog front is probably going to be a bit quiet. Unless readers here are interested in 5e, which I certainly could write about, but the feel isn't right for me. I'm considering taking that to a separate blog, which would be devoted to that game. But I will definitely have a writeup of lessons learned from the Philly GamesCon game.
Posted by Wayne R. at 2:38 PM