The Greek word χθόνιος (chthonios) referred to the ground, but in a specific way, meaning "underground" or what we would call the underworld. Today we refer to Hades, Persephone and other underworld gods as the chthonic deities. Despite any superficial resemblance, the word is unrelated to the work of H.P. Lovecraft; it's pronounced "thonic" or "k-thonic".

Even in antiquity, Hades was referred to as Zeus Chthonios, giving him a role as an underground ruler. This is reinforced by his staff, a symbol of authority, which typically had two tines, as opposed to the three of Poseidon's better-known trident. The Romans particularly conflated him with multiple other chthonic gods, creating the distinct god Pluto.

Generally we treat the Roman gods as simply renamed versions of their Greek counterparts, but even the name "Pluto" came from a separate Greek god, Πλοῦτος (Ploutos). The conflated deity symbolized both the underworld (which took on the name "Hades") and wealth, which of course originated from mines deep under the earth. Pluto was also combined with the Roman chthonic god Orcus; while the name is familiar to D&D fans, the image of the god itself is even weirder: 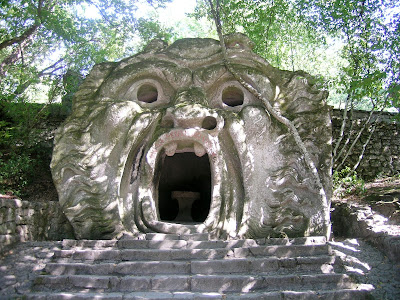 (This is taken from a 16th century monument, the Gardens of Bomarzo, but I didn't feel like I could do chthonic gods justice without it. And it's a great dungeon entrance.)

Aside from his obvious D&D namesake, the name "Orcus" is probably the inspiration for such diverse creatures as ogres, orcs, and the killer whales called orcas. Not surprisingly, he was less of a stoic underworld-ruler and more of a black, hairy death god, surviving from the ancient Etruscan myths. As a bonus, Orcus was the son of Eris (Roman name Discordia), thrower of the infamous Golden Apple that initiates the Trojan War. Pluto more generally was not a death god, however; that function went to Thanatos, a relatively minor god.

The combined Pluto has a symbol of a key, which he also shared with Persephone, and a cornucopia - a horn of plenty. The key was also a symbol used in the Eleusinian Mysteries; the initiate was sealed with a golden key, variously described as on the tongue or the lips, indicating the secrecy of the mysteries they had been taught. Keys could also indicate the riches that would come from the earth, both in crops and in underground mines.

In some myths, Hades is the father of the Erinyes, or Furies, also known as the Eumenides (the Kindly Ones). This literal euphemism is an ancient way of not referring to deities by name. The Erinyes were vengeance deities; of course, they also have AD&D analogues. Persephone is said to have had a daughter Melinoë, also identified with the goddess Hecate, who is described in the Orphic hymns as "Now plain to the eye, now shadowy, now shining in the darkness," and is said to give men nightmares and drive them mad.

There is obvious gaming material here, even aside from Orcus and the Erinyes showing up. I really love the symbolism of a golden key related to underworld secrets. The key can unlock secrets of the underworld, hidden treasures, or truths of life, death, and immortality. It can also be a common bond among characters who have truly been to the underworld and survived - its secrets may not be passed on lightly to every foolhardy newcomer, but to someone who has the key it is revealed. And of course the form may be either physical - a key or key-shaped artifact, or a symbol, drawing, poem, book or other entity that serves as "the golden key."

I also find the idea of Melinoë tempting. As a granter of nightmares, such a character explains why the PCs can't constantly hole up and camp in "cleared" dungeon rooms. Haunting dreams and potential insanity wait for those unsound enough to sleep in the underworld. Her shifting, elusive character also seems like it would be ideal for monsters, and she is tied in with witches and necromancers, which fits perfectly. If you wanted to use a "Petty Gods" approach where low-level deities were actually present in the game world, Melinoë would be a good fit. The Erinyes are an interesting fix for murderhobo type activity that goes beyond normal cruelty.

Lastly, in spirit the triad of judgmental Hades, generous Pluto, and savage Orcus are a brilliant match for how a dungeon should be designed. It should be serious and otherworldly, but with great riches hidden in secret places, and sudden terrible violence should be a norm. These are very much the gods who direct the underworld of a D&D dungeon.
Posted by Wayne R. at 9:29 PM