A Proposal: The Six-Page Dungeon Level

Apologies if this is a bit long; if you want to find out how a Six-Page Dungeon Level will work, just skip to the end.

This post is prompted in part by an article I've shared before, Why Word Walls Won't Work, as well as Ramanan Sivaranjan's review of Forgive Us and the 2014 One Page Dungeon Contest Entries. And of course usability issues from my recent post against boxed text.

Most reviews of Forgive Us, unlike Ramanan's, don't highlight the layout (which you notice more in the printed book than if you're reading the PDF). That's unfortunate, because it's a really well-done product in that regard. Green took the two-page spread as the fundamental element of his adventure and made it so that each spread basically has what the referee needs at that point in the adventure. That is an excellent goal.

There are a couple reasons that I've been thinking about the one-page dungeon template; aside from the fact that this year's contest has just ended with 110 entries, Michael Curtis is nearing completion of Stonehell II, a product built around a modified one-page template, and I recently used the first half of Stonehell in a discussion as an exemplar of good layout. 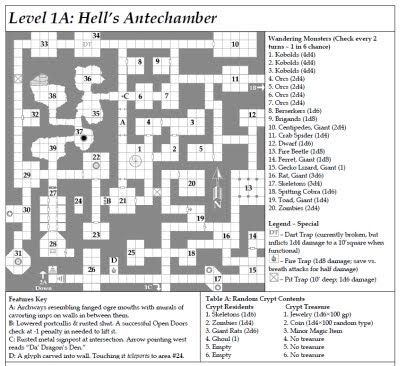 I find that one-page dungeons often tend to be one-idea dungeons. It's too compact to convey a full dungeon level that isn't very conventional, so one-page dungeons generally have one or two gimmick ideas and not much more to offer. Curtis busted this limitation open in Stonehell by going to two pages, having more pages before the two-page spread detailing the rooms that needed more detail, moving full monster stats outside of the key, and putting charts at the end of the product for detailing the rooms that only get a couple of sentences.

There was an entry in the one-page dungeon contest that does stand out to me, Stellarium of the Vinteralf by Michael Prescott and Michael Atlin. I'd seen it before, and I back their Patreon campaign so this isn't exactly news to me, but it is a very neat design. Isomorphic maps have certain limitations, but it shows a good way to integrate text and pictures in communicating ideas. As a system-neutral thing I think that it's not 100% as useful as I'd like, but it's influenced what is kicking around in my head.

Both the standard module format (every room with a description in the key) and the one-page dungeon format fail to highlight the central points of interest. "Filler" rooms have equal standing with the most complex areas of the dungeon. (I'm tempted to call this "Dwimmermount Syndrome" but not everybody is a backer so you may have not actually read Dwimmermount.) Stonehell solved this somewhat by bringing those points onto separate pages from the main key, but I'm wondering if this isn't somewhat backward.

Unless a dungeon is so meticulous in its design that every element, every monster or treasure presented is totally unique and necessary in its specific place, there is no reason for published dungeons to stock filler rooms. You need these rooms in gameplay for pacing, which is why tournament modules tend to be poor fits in campaign play. Every room shouldn't need to be a special room; if you had, say, thirty rooms in a dungeon level, there should be maybe 10-12 rooms that need specific details.

The other 18-20 rooms can be determined by charts. Now, as a rule of thumb I would say that having to flip 1-2 pages isn't a bad thing. You still fundamentally have your "place" in the book, even if you need to make a cross-reference back and forth. Having to go to a completely different section of the book, though, is extremely annoying in play. This was a weakness of Stonehell, where the charts for randomly determining room features are inconveniently located in the back of the book.

What I'm getting at is the Six-Page Dungeon Level. It would work like this:

Pages 1-2: This details the overall feel of the level, provides stats for any new monsters or magic items introduced in the dungeon level, notes about level features and any clusters of rooms, and any special rules that may apply to areas within the level. Very much like the first two pages of a dungeon level quadrant in Stonehell.

Pages 3-4: A two-page spread with the dungeon level map and the keyed areas, representing about 1/3 of the total areas indicated on the map. Other areas can have contents indicated in a legend format, such as letters or symbols for "Monster," "Treasure," and "Trap."

Pages 5-6: Tables and charts. Including random encounters for the level, and potential monsters, treasures, traps and anything else thematic (dungeon dressing) that might be in the unkeyed areas or enhance the keyed areas.

As necessary, illustrations and so forth go on pages 1, 2, 5 and 6. The ideal is that a referee needs to read pages 1-2, and then just glance through pages 3-6 in order to "get" the central idea of the dungeon.

It lacks a bit of the snappy cachet of the one-page dungeon level, but I think that it gives the proper room for a designer to focus on putting the correct balance of their own ideas and not wasting our time with filler rooms. It also is pretty close to my ideal for use at the table; at most you only have to flip two pages.

I'll see about getting together a dungeon level as an example in the near future.
Posted by Wayne R. at 9:21 AM