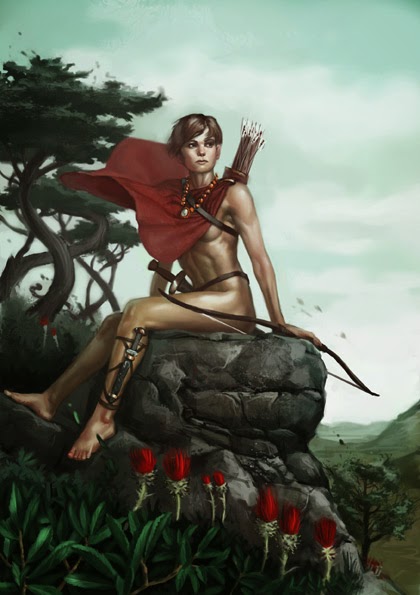 The whole Internet Drama over Isle of the Unknown (the source of the gorgeous picture to the right) reminded me of something Geoffrey McKinney did in that book that I've given serious thought to at times. Namely, instead of giving the magic-users a repertoire of spells from the list in Lamentations of the Flame Princess, he chose to give each one a unique and non-repeatable power, frequently tied to some piece of equipment or to animal companions (part of a Zodiac theme that is shot through that work).

Another LotFP product, The Seclusium of Orphone of the Three Visions (which I feel that I should like in principle but find myself tepid on in execution) assumes that proper wizards aren't limited to spell lists and straight-up have powers and "often they are other things entirely, and have other origins, natures, and lifecycles."

I've considered using a similar for NPC wizards, giving them powers that don't neatly slot into the standard D&D spell system. Partly I think this is really juicy and mythic; it isn't like Circe or Merlin runs around casting Fireball or Detect Magic. They have powers, properly, and those aren't constrained by the limits of a spell list. I find the idea that NPC wizards and witches might have straight-up powers that aren't on the spell list to be an easy way to inject a bit of mythic wonder into a game.

A second reason I've considered it is the relative power of certain spells. It's long been noted in old school circles that an enemy magic-user can TPK a low level party pretty trivially by casting a single Sleep spell. There are ways to "go easy" on a party once Sleep is cast, but a lot of them are sort of lame. Giving the enemy wizards some totally unrelated powers seems to be an easier way to resolve this.

There are further benefits to this approach. One is cross-compatibility. Probably the biggest fiddly issue with modules and supplements is when a magic-user's spell list is enumerated and it contains a spell that's not in the specific game you're using. This is an annoying problem with clones. A unique powers cuts this out, since the power is listed directly. The other is simplifying high-level magic-user encounters for the referee. Instead of juggling a dozen or more spell options, the referee just has to pick from, say, one to three powers.

Of course there is a downside. Specifically, it's something of a tease to give enemy wizards a power that PC magic-users can basically never get. That's not to say that PCs normally get other magic powers, like a dragon's breath or a basilisk's gaze, but using the same spell list for PCs and NPCs does give PCs the aspiration of being able to turn the tables on foes. This can be remedied by making a way to get these powers, but making it very difficult to do so. If you run a game where finding spellbooks is difficult, not having NPC casters use spells is an obvious issue. And it does cross a certain "feel" boundary, since NPC magic-users casting spells is a pretty ingrained part of the game from its earliest days.

Still, I think it's an idea worth doing some experimentation with. An NPC wizard able, say, to shape and control certain plants might be a really interesting wilderness encounter, or a witch whose hexes go outside the "normal" boundaries of the spell system. I'm going to give this one a bit more thought on ways to go forward, but I like the basic concept.
Posted by Wayne R. at 8:54 AM