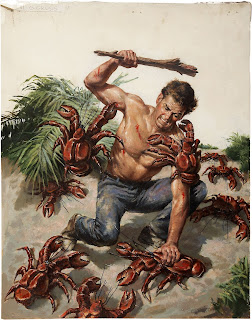 Yesterday, I began what I'm hoping will be a long-term monthly first edition AD&D campaign set in the borders of a medieval-ish kingdom on the edge of a set of weird mountains, with a few twists and very little of your classic AD&D monsters or treasure. It went reasonably well, though I'll have to get used to navigating the AD&D books.

As a note on system choice, it comes from a feeling that the long-term campaign interests are best served by AD&D, but letting a lot of the cruft associated with that system fall off. It can be useful but a lot of it can be simplified, particularly things like training or initiative. Developing good DMing reflexes and then letting players follow through, in my opinion, is a bigger deal than the specific system that is up front.

One rule twist that I thought was fun is that I've adapted the general sensibility of Dungeon Crawl Classics's "Mighty Deed of Arms" to a natural 20 in combat. It just gives things a bit more of an edge, having that possibility of imposing a disadvantage on your foe, either giving a penalty or costing them an action - that sort of thing. It also gets the player into the description of the event. I also think it's a great way to respond when players want to do something cool but very difficult, they can just roll for it and at least have a shot.

The party started off with two clerics, and considering the adventure seed was to investigate a formerly-abandoned temple that a cleric had gone to re-found, the PCs wound up well motivated. I asked the players to explain how the PCs know each other, which I like as a setup for a campaign a lot better than "hey, you meet in a tavern."

The adventurers were quite cautious approaching the temple, which was on the side of a mountain, and getting up and into it with care. They followed a path that took them to a set of stairs that actually went back into the open mountain air (this was riffing on a very interesting Dyson Logos map that I'll share at some point when it wouldn't be a spoiler) and back in.

A side chamber on the way, though, provided a diversion that changed the venture completely. The dwarven fighter who was taking point had the bad taste to look at a water nymph bathing in a pool - and proceeded to fail his saving throw, rendering him instantly blind. I had been curious how the encounter would turn out, and it turned out to be very interesting indeed. Since he'd had to go up stairs to see the nymph, the positioning stopped anyone else from having to look, and they got him back down the stairs and figured out about the whole blindness.

The dwarf's player was quite game about this and remarked a few times that he should be playing with his eyes shut. It was an interesting experience DMing for a character with blindness, because of course as a referee you are primarily describing the visuals of the world, what the characters see – and suddenly you're having to think of the imagined world in a different way. The dwarf took up torchbearing duties in place of the ill-fated hired torchbearer, and the party soldiered on.

Up in a room at the top of the stairs they found a pool with some very large lobsters in it. I based the stats on a monster I've always meant to use, Matt Finch's tunnel prawns, and that AC 4 proved a really tough thing for the PCs. After a couple of successes, the party began to lose the fight. Out of an initial party of five (two clerics, a halfling thief, a dwarf fighter, and an elven magic-user) plus the torchbearer, they lost the halfling, a cleric, and the torchbearer. The elf, the blind dwarf, and a cleric who had been on death's door managed to retreat. The others died in the lobster room and became lobster chow.

The PCs decided to go a long venture back to a larger city where they found a temple of Dagda, the god of both clerics. The cleric in service at the temple had a 9 on his reaction roll and decided to help the PCs out, and got the high priest, who heard their story and I rolled a 12 on the reaction roll. This was too good to pass up - I decided he was the uncle of the cleric who'd been lost, he was deeply grieved, and so moved that he wanted to help the PCs. He cast Cure Blindness on the dwarf and proceeded to give the PCs healing potions and get replacement characters for the other players, who returned to the temple.

With the new group the party moved back to the temple, only to find that the initial doors had been shut - which had been wide open when they came there before. They found their way up via a Spider Climb spell and some rope, and got their revenge on the lobsters. The last two of the initial six broke morale and went into another room. Soon after they heard a commotion.

The new room led to men with scimitars hacking at lobsters, who the PCs helped by killing the lobsters. Their boss claimed to be a merchant, but was haughty and ill-treated the surviving cleric; when the dwarf wanted to get them out he used Magic Missile and the fight was on, but the PCs won this one readily.

That was about wrap-up time for the night; the PCs made off with some treasure that the lobsters were guarding, and the merchant/wizard's money. There were two fatalities but a good share of money went to the newly composed party (adding a half-elf cleric/ranger and an elven magic-user/thief). There's still exploration to be done but the PCs got a chunk of the way through first level, the hard way.

AD&D worked well for the game, and it ran mostly like I expect things to run, except that a few things were percentile where I'd typically call for a d6 roll. There's nothing wrong with that, and the feel and flow are not hard to fix to what D&D has taught me. The lobsters were tougher than I expected, and the combat with them had a lot of swings and misses on both sides. But it was a fun, interesting game and I like the transition over to AD&D. I'll try to do a few posts on specific differences that I find interesting between the systems.
Posted by Wayne R. at 11:12 AM