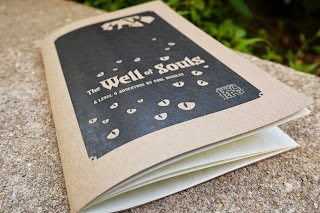 At Philly GamesCon, I signed up to play in Carl Bussler's Dungeon Crawl Classics game for the morning session. Carl ran his own funnel adventure, The Well of Souls, which he designed as an introduction to DCC and also a lead-in to the sandbox module Treasure Vaults of Zadabad. Ever since, I've been re-reading the DCC rulebook. So I'll talk a bit about the adventure, and a bit about the system.

First, the adventure. Eight PCs representing 6 players went down the Well of Souls, and four hours later, eight clambered back out. I had a woodcutter, an elven artisan and an ostler. The artisan would die fashioning makeshift shields, while the woodcutter looked in the wrong cauldron and died falling over a waterfall on a river. The ostler survived, and will have become a thief if I ever play him in a future DCC game.

Well of Souls is a tight module, which if I had any criticism it's that the only serious choice-point is the one at the very beginning. A portcullis locks you in if you go one way, while a solid iron door blocks the other. We encountered dropping cave-octopus creatures, which eventually took out my elf; pit traps and bats; a secret door; a boat, which I added to my woodcutter's character sheet; the aforementioned iron door, which occasioned the needless sacrifice of a duck; a math puzzle; fought skeletons; and finally a giant bronze crocodile that shot either lightning or fire from its mouth. For four hours of gaming, that's a good bit of fun.

I wanted to go through a DCC funnel, because I've heard they are a lot of fun. This turned out to be completely accurate. But I understood a lot more about funnels and how they play into DCC as a game. Your PC has stats, a single weapon, a trade good, and a birth sign. The character is almost entirely random. But the ones who survive wind up having a distinct feel to them, partly driven by the random stuff, partly by the experience of surviving. It's a brilliant way to mix a bit of background with characters emerging from play. 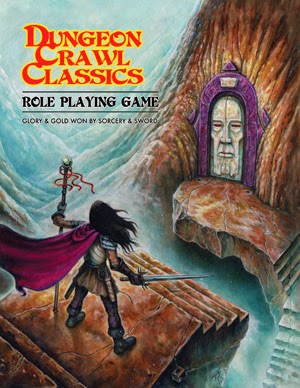 So, on to the DCC system. It's funny how much the DCC game is really the D20 system, but taken in a radically different direction. I like that it changes the 6 basic ability scores, and find that Luck is an intriguing switch from Charisma. It sets the tone from the get-go that things are going to be familiar but different. And the rest of the game builds on that.

One reason I'm interested in DCC as a system is that the Mighty Deed of Arms die seems to me like it's inviting the kind of play I'd like to see more of: creative interaction within the combat system. Older D&D doesn't seem to inspire a whole lot of it, while a Warrior rolling the Deed die on every hit always has a chance to do something spectacular. The worst that happens is that you don't get your extra heroic bit.

Magic is pretty crazy. I mean, the rulebook is only as big as it is because magic is such a big part of it. You don't really touch it on a funnel, but my impression both from reading and from discussions is that magic can really take over the game. It seems appropriate in a way, since it's magic, but I'd be interested in perspectives on the pros and cons. I like the basic mechanical concept of a "spell check"; it's something that Chainmail had but D&D never picked up. (An early clone, Spellcraft & Swordplay, ran with the idea but nobody talks much about that game.)

I don't really want to analyze the thing to death; the point is that, as an RPG that is practically made of charts and uses funkier dice than most, DCC has a couple of feelers out trying to get at my heart. The other thing that really makes me think it has something is the chunkiness of each level: since it was originally only designed to go up to 5th level, it seems like you get a lot of game out of each level. DCC also seems to have what I'll call a unique aesthetic, where each room and encounter is encouraged to be epic, that has been growing on me slowly as I pick up modules here and there.

So a round of applause to Carl, who's got me thinking more and more about DCC.
Posted by Wayne R. at 4:28 PM