Disasters in the Underworld 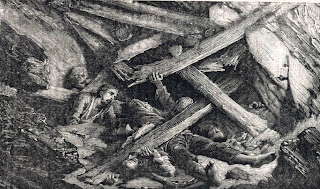 Historically, we as humans have spent a lot of time digging holes in the ground. Throughout that history, we've had those holes collapse or blow us to holy hell. Coal miners have been known to bring canaries underground so that the birds would die from carbon monoxide poison while the miners still had a chance to escape alive. Even in modern industrial mines, a blowout can still lead to fatalities and miners spending days or weeks trapped underground with limited food and no sunlight. In Centralia, Pennsylvania, a coal mine fire started in 1962, is still burning in 2013 and will continue to burn unabated for 250 years.

In Dungeons & Dragons there's so much we can take out of this. The point I want to reach is in making underground disasters a challenge and not an annoyance or a simple declaration of "rocks fall, everyone dies."

The first type is to take a disaster that happened in the past. It becomes dungeon dressing: this is a collapsed hallway. Perhaps it conceals treasure, or a short cut, or a danger so awful that someone tried to bury it beneath the earth. Or maybe it's just a cave-in. There could be any number of horrors lurking in the earth, both giant insects and various tunneling monsters like the bullette. A wholly or partially collapsed dungeon area is fair game for being inherently dangerous; if it collapses, the existing fall should have served as adequate warning.

Other kinds of disasters than simple collapses could be interesting. Fire is one very dangerous thing; at low levels, a party will tend by its nature to have torches and/or lanterns. In general, there are plenty of flammable gases underground. A methane leak 50 years ago could make the air (or, as we know from modern gas mining, the water) flammable. Areas in an old mine or similar area might have the chance of causing a dangerous flare-off. On the other side you have possibilities like the Centralia mine, where there is literally a long-standing fire underground.

The second type of disaster is the one that only exists in potential. The most obvious of these is the inherently unstable area, where the local stone is weak and prone to shift catastrophically. The legend of the "tommyknockers" is drawn from the knocking sounds made by wood mine supports as they buckle and fail in advance of a cave-in. This is generally a feature that can make dungeons very dangerous, but players are likely to find it grossly unfair if the referee simply has a cave-in kill the PCs, however naturalistic that may be.

Such disasters can be foreshadowed in various ways. Noise is one; queer rumblings deep in the earth could be a dragon or balrog, but they could also be the signals that the earth is waiting to reclaim our band of adventurers. Popping and knocking in a wood-reinforced mine, or even the occasional support that is cracked down the middle or falling, can be one way of signalling this. All of this creates a sense of danger, and creates a time / action pressure on the PCs. It's one way to create what I've called in the past "fast" levels - levels that don't encourage in-depth exploration.

Of course there's also the possibility of PCs being trapped in the underworld. This can be a really railroad-ish tactic for a referee, although it can also really turn the "exploration" aspect of the game up if it leads to a new or different area of the dungeon. In a way this is a deeply Gygaxian trap, something like his teleporters that create a sudden need-to-find-the-exit situation in the underworld. This works particularly well if the cave-in happens to be a sinkhole down to a new level.

Last, a military solution would be an interesting cave-in situation: it is possible that some monsters or enemies have built a counter-mine intersecting with the "normal" dungeon that causes a collapse and then reveals a waiting ambush. For instance, undermining most of the way through a floor might make a normal person fall through it and become vulnerable to the attack below. In general counter-mines are a really fascinating way to fundamentally change a dungeon from beneath the ground.

As usual with my "idea" posts, I'll yield the floor with the question: what have you done with disasters, large-scale fires, cave-ins and other catastrophes in the dungeon?
Posted by Wayne R. at 3:07 PM